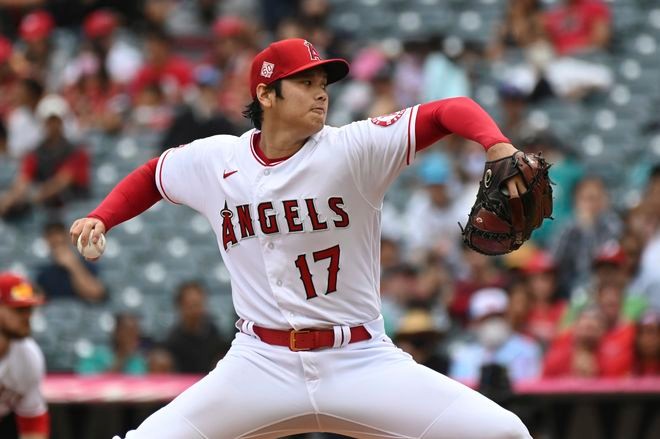 Los Angeles Angels pitcher Shohei Ohtani throws to home plate during the first inning of a baseball game against the Seattle Mariners on Sept. 26 in Anaheim, Calif. (AP Photo)

Ohtani allowed Jarred Kelenic's tying home run in the seventh inning, and Mitch Haniger hit a go-ahead single in a four-run eighth against the bullpen that lifted the Seattle Mariners over the Angels 5-1 Sunday.

Ohtani gave up one run and five hits in seven innings with 10 strikeouts and no walks. He remained 9-2 and lowered his ERA to 3.18 with 156 strikeouts and 44 walks in 130 1/3 innings. Ohtani reached double-digit strikeouts for the fourth time this season and second start in a row. If he makes another start, it would also be against the Angels.

He was 1 for 3 at the plate and is hitting .258 with 98 RBIs and 45 homers, one behind co-leaders Toronto's Vladimir Guerrero and Kansas City's Salvador Perez. He has just one home run since Sept. 10.

Seattle has won seven of eigh and will enter the final week two games back for the AL's second wild card with six games remaining. Toronto is also a game in front of the Mariners.

Marco Gonzales (10-5) gave up one run on three hits over seven innings, improving to 7-0 in his last nine starts. Kurt Suzuki homered in the second, his 14th this season.

Kelenic homered on a slider from Ohtani, who had escaped two-on trouble in the fifth and sixth innings.

Seattle finished with three games at home against wild-card contending Oakland and then three against the Angels.

Angels: RHP Jaime Barria was placed on the 10-day injured list with a right-shoulder impingement. He ended his season with a 2-4 record and a 4.61 ERA in 11 starts and two relief appearances. The club recalled RHP Sam Selman from Triple-A Salt Lake.