EDITORIAL: Suga leaves key diplomatic issues for his successor to have to resolve 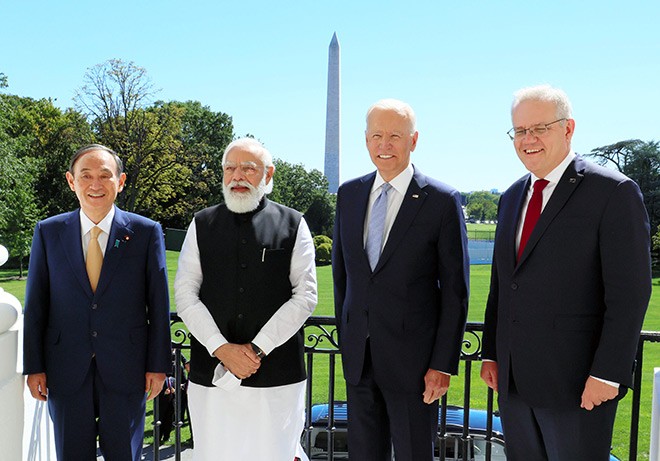 During his yearlong stint as prime minister, Yoshihide Suga has stepped up warnings against China’s emergence by consolidating the alliance with the United States and partnerships with countries with which Japan shares common values.

However, Suga has never worked on his own initiative to open direct dialogue with China or improve soured ties with South Korea.

Suga, who is soon to leave office, has left serious diplomatic challenges yet to be addressed. Whoever succeeds him as prime minister will face an urgent need to rebuild Japan’s frayed ties with its neighbors, in particular.

Suga has wrapped up his U.S. visit, his final diplomatic mission as the nation’s leader. He attended the first in-person summit by the leaders of the Quad framework of Japan, the United States, Australia and India and also had a brief discussion with U.S. President Joe Biden, with first lady Jill Biden in attendance.

An overseas trip is unusual for a prime minister who has announced his resignation. In Japan, the wisdom of the visit was called into question, all the more because a state of emergency remains declared in Tokyo and other parts of the country over the novel coronavirus pandemic.

However, Suga blew his own horn by telling reporters in the United States that he believes the Quad, which was initially proposed by Japan, has “completely taken root.”

By way of illustrating diplomatic achievements over the past year, Suga said he has worked to consolidate the Japan-U.S. alliance, promoted the vision of a “free and open Indo-Pacific,” and focused on multilateral efforts, such as when Tokyo co-hosted a summit in June to ensure that COVID-19 vaccines would be shared through the international COVAX program.

Lurking behind all those actions is an undertone of rivalry with China. It was pointed out that even the COVAX summit was held against the backdrop of a sense of alarm about China’s vaccine diplomacy strategy.

A joint statement issued following the Japan-U.S. summit in April emphasized a tough stance toward China and expressly mentioned the “importance of peace and stability across the Taiwan Strait.”

While Suga was in office, Japan also strengthened its cooperation with European nations on the security front, including by conducting joint drills with the armed forces of Britain and France.

By contrast, efforts to seek dialogue and cooperation were apparently put on the back burner. Suga held talks with Chinese President Xi Jinping only by phone immediately after he was sworn in as prime minister.

We should point out the Suga administration lacked independent ideas on how Japan, caught in the middle of the U.S.-China rivalry, could preserve its own peace and security without just following Washington’s China strategy.

A lack of dialogue also characterized ties with South Korea. While in office, Suga never got around to holding a summit with President Moon Jae-in.

There were opportunities for doing so.

One such occasion emerged when a Group of Seven summit was held in June in Britain, where Moon was also invited as a guest. However, the two leaders ended up only exchanging greetings.

A plan for having Moon visit Japan in July to coincide with the Opening Ceremony for the Tokyo Olympics was also shelved.

While there is a deep rift between Japan and South Korea over issues of their shared history, Suga never took a step to find a breakthrough in the stalemate from a broad perspective--a decision that only the nation’s leader can make.

Resolution of the issue of Japanese nationals abducted by North Korean agents in the 1970s and 1980s, which Suga defined as a “top agenda item” for his administration, saw no progress.

There were no moves, either, for putting the talks with Russia back on their feet over the issue of the disputed Northern Territories.

Suga did not even conduct a critical review of how and why the previous administration of Shinzo Abe failed in the talks over the four islands off the eastern coast of Hokkaido, which were seized by the Soviet Union in the waning days of World War II.

A prime minister has a duty not only to deal with individual issues but also to use his own language to send out messages to audiences at home and abroad on the ideals and strategies of diplomacy that he believes Japan should pursue.

We strongly call on whoever succeeds Suga to be faithful to that duty, which was not a strong point for the outgoing prime minister.