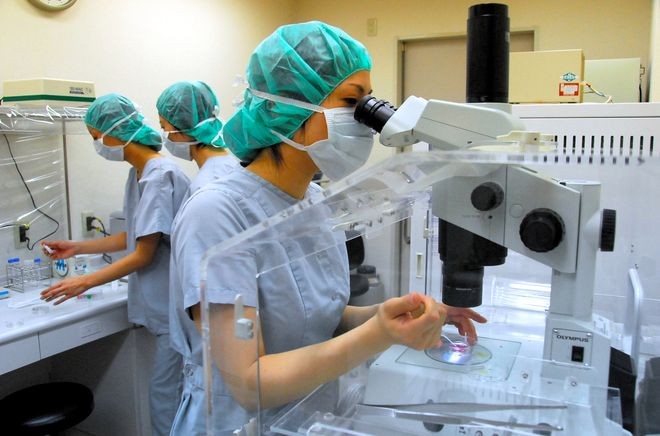 An embryo cultivator checks the conditions of a fertilized egg in the in-vitro fertilization process in Osaka. (Asahi Shimbun file photo)

Genetic code screening for in-vitro fertilization (IVF) reduces the risk of miscarriage, according to a survey.

The Japan Society of Obstetrics and Gynecology’s midterm report, based on an ongoing clinical study, also showed that preimplantation genetic code checking may increase the chances of pregnancy, but it said further studies are needed for confirmation.

“It (the genetic test) is expected to help ease the mental and physical burden of women who have suffered multiple miscarriages,” a JSOG representative said.

Under the test, all chromosome numbers are examined for eggs fertilized in vitro so that only abnormality-free ones are returned to the uteri.

A fertilized egg with an extra or missing chromosome is more difficult to implant in the uterus and raises the possibility of the pregnancy ending in miscarriage.

Older women are believed to be more susceptible to such complications.

Selecting only fertilized eggs with proper chromosome numbers is theoretically expected to increase the rate of successful pregnancies and deliveries.

The preimplantation test is common in Europe and the United States, although it has not been proved that the method is actually helpful.

In 2020, the JSOG started clinical research into the technology’s effectiveness, targeting women who have suffered two or more miscarriages, couples who have failed in IVF twice or more in a row, and spouses with chromosome anomalies.

While the study will continue until the year-end at 109 medical centers nationwide, test results of the 4,348 patients who had joined the program by July were made public at a symposium on Sept. 23.

The findings showed that the subjects became pregnant in 66.2 percent of the cases in which fertilized eggs were successfully returned to the wombs after genetic screening. Of them, 9.9 percent miscarried.

No significant differences in those rates were reported for different age groups.

According to the JSOG’s 2019 data, the pregnancy rate was 33 percent of women whose fertilized eggs were reintroduced in the uteri without genetic screening. The miscarriage rate for them was 25 percent.

The JSOG noted, however, that 63.4 percent of the 4,348 patients in the latest survey were unable to have their fertilized eggs returned for various reasons, such as eggs with abnormal numbers of chromosomes.

Because of that, the JSOG said it is still unclear whether the genetic screening can improve the overall percentage of successful deliveries, and that it will continue the research.

A number of other challenges remain for the test.

The method’s potential long-term impact on children has not been made fully clear, and concerns have been raised that the technology could be used to “play God.”

Since all chromosomes are examined, the technique could lead to the elimination of people with certain disorders, including Down syndrome patients who have an extra chromosome in the 21st pair.

The JSOG’s current guidelines prohibit surveys of all chromosomes for the purpose of preventing miscarriages or to help continue a pregnancy.

The method’s use is limited, for example, to couples who have repeatedly suffered miscarriages because of deformed chromosomes.

The JSOG will hold another symposium by the end of October to discuss the detailed processes of genetic screening.