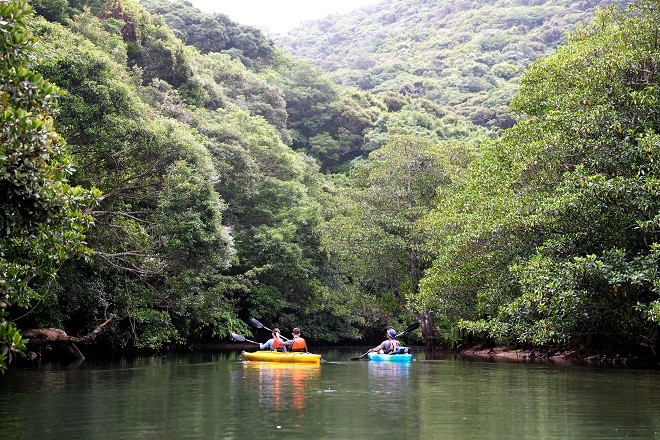 "The basin is heavily congested during peak hours, and there are spots on the ground where roots and rocks have been scraped in repeated passes," said Harumi Tokuoka, director-general of the Iriomote Island Eco-Tourism Association.

After Iriomotejima was included on UNESCO's World Natural Heritage list as part of southwestern islands on July 26, the problems of crowds will only grow worse.

Locals are striving to protect nature on these pristine islands, which are home to many endangered species, by adding such items as composting toilets and a "cooperation" donation system.

Along with Iriomotoejima, which is part of the town of Taketomi, the islands of Amami-Oshima and Tokunoshima in Kagoshima Prefecture and the northern portion of Okinawa Prefecture’s main island were granted the World Natural Heritage status.

The subtropical islands are said to be Japan's last natural World Heritage site.

It remains a challenge to prevent their overuse that causes deterioration in the natural environment due to an increased number of tourists.

An international organization that recommended their inclusion also mentioned Iriomotoejima by name and urged relevant parties to take conservation measures, while there are concerns about the impact on the daily lives of locals.

"We wanted to do something about it because we were worried about the odor," said Yuji Kunimi, 43, a member of a canoe union comprising local guides, pointing at a public restroom at a parking lot near the departure point for canoe tours.

Previously, tour participants were often asked to relieve themselves at a "toilet spot" at the side of a trail on their way to the departure point.

Thanks to the convenience of half-day tours, Pinaisara Falls now attracts more than 30,000 visitors each year. But the popularity also caused problems of foul odor and discarded tissue paper.

To address the situation, the union used subsidies from the Environment Ministry to set up composting toilets that decompose human waste using microorganisms in December 2020. Three toilet seats to use portable toilets had been installed in an area around the basin in 2019.

However, the composting toilets can accommodate only up to 60 people a day, while the waste from the portable toilets must be collected in a collection box before it is burned in an incinerator along with trash from residents.

Located north of the Amami-Oshima and Okinawa's main island, Yakushima island in Kagoshima Prefecture is known for its Jomon-sugi Japanese cedar tree, which is thousands of years old.

Standing at the entrance to the Arakawa Trail leading to the island's symbol is a signboard asking visitors to pay cooperation money to enter the mountain.

The donation system was introduced in 2017 to ask day-tripping climbers of junior high school age or older to voluntarily pay 1,000 yen ($9), with those planning to stay overnight in the mountains requested to pay 2,000 yen.

The money is used for maintenance of the trail, to remove human waste from toilets in mountain lodges and for other purposes.

The number of visitors to the island was about 200,000 in fiscal 1993. But the figure continued to increase thanks to the recognition, with more than 400,000 tourists visiting the island in fiscal 2007.

But tourist congestion along the trail that requires five hours of walking to get to the Jomon-sugi became a problem. Climbers had to walk in a long line, occasionally waiting up to one hour to use a toilet.

Although Yakushima town officials tried to use donor money to remove human waste previously buried in the mountain, the municipality continued to bleed red ink.

The officials considered the introduction of an entry tax to the island to secure additional financial resources.

But the idea was abandoned due to concerns over the impact on the tourism industry. Instead, they decided to collect cooperation money on a voluntary basis.

In 2011, the officials submitted a draft ordinance to limit visitors in an area surrounding the Jomon-sugi to 360 day-trippers per day. But it was voted down by the assembly, leaving a discrepancy between the two parties over a balance between conservation and the utilization of nature.

Meanwhile, the Okinawa prefectural government last year set the maximum number of tourists coming to Iriomotejima at 330,000 a year, or 1,230 a day.

However, that was merely a target number.

The introduction of an entry tax to the island is also being discussed, although it is only for a study purpose for now, according to the Environment Ministry.

To conserve the natural environment of the island, the Taketomi town office, local tourism associations and other parties will set up the Iriomote Foundation this fall.

The general incorporated association will exclusively handle practical operations of tourism management such as establishing a licensing system for guides and limiting the number of users at popular spots.

The officials are soliciting donations and hope to raise 20 million yen.

"We hope we can receive support so that residents and visitors alike can enjoy the blessings of nature," a town official said.

(This article was compiled from reports by Tsuyoshi Takeda, Satoshi Okumura and Makoto Hokao.)