Survey: Kishida, Kono each backed by over 100 lawmakers 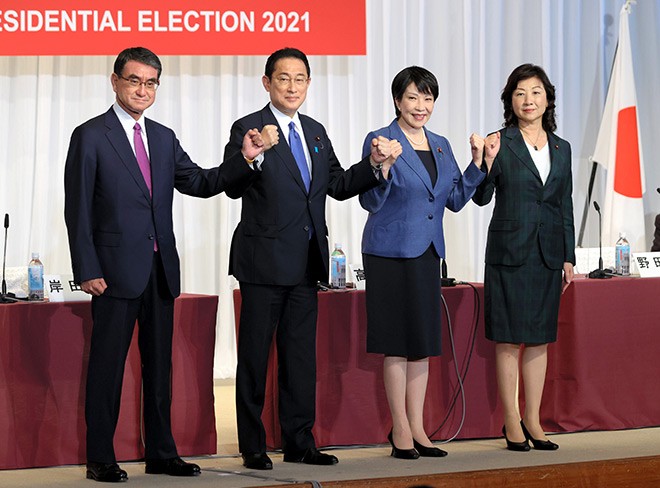 Fumio Kishida and Taro Kono are running neck and neck in terms of lawmakers’ votes in the ruling Liberal Democratic Party’s presidential election, which appears headed toward a runoff, an Asahi Shimbun survey showed.

The survey asked 382 LDP Diet members or their aides by Sept. 26 about their preferred choice to succeed Yoshihide Suga as party leader and prime minister. It received responses from 381.

More than 110 Diet members said they will vote for Kishida, 64, former LDP policy chief, in the Sept. 29 election, while Kono, 58, the administrative reform minister, garnered support from more than 100 lawmakers.

The two were followed by Sanae Takaichi, 60, former communications minister, with the backing of more than 80 Diet members.

Seiko Noda, 61, the LDP executive acting secretary-general, was supported by a little more than the minimum endorsement of 20 LDP lawmakers required to run for party president, according to the survey.

The election results could still be swayed by the more than 60 party lawmakers who did not make clear whom they support.

In addition, rank-and-file party members and supporters will account for half of the weight of ballots in the first round of voting.

Many party members expect no candidate will win a majority in the first round, which would force a runoff between the top two vote-getters.

The weight of lawmakers’ votes will be overwhelming in the event of a runoff.

Kishida has secured support from all 46 members of his own faction as well as some lawmakers from the 96-member Hosoda faction and the 53-member Aso faction, to which Kono belongs.

Kono is backed by more than half of Aso faction members, just under 50 percent of lawmakers from the 47-member Nikai faction, and roughly 70 percent of Diet members from the 17-member Ishiba faction.

Rank-and-file party members and supporters are freer from faction politics than lawmakers and may vote for the candidate who is most popular among the public.

According to a Sept. 11-12 nationwide telephone survey by The Asahi Shimbun, 42 percent of LDP supporters wanted Kono to win the election, followed by 19 percent for Kishida, 12 percent for Takaichi and 1 percent for Noda.

The survey was conducted before official campaigning kicked off on Sept. 17.

Thirteen percent of LDP supporters backed Shigeru Ishiba, former defense minister and LDP secretary-general, but he announced he will not run in the election on Sept. 15.

Surveys by other media outlets after campaigning started also showed Kono was the most popular among LDP supporters, followed by Kishida and Takaichi.

The presidential hopefuls will compete for a total of 764 votes, with half of them allocated to LDP lawmakers, excluding the Upper House president and the Lower House speaker, casting one ballot each.

The remaining half will be distributed according to how the 1.1 million rank-and-file members and supporters nationwide cast their ballots.

In a runoff, the 382 party lawmakers will get one vote each, while a total of 47 votes will go to LDP prefectural chapters.