SUMO/ Sources: Hakuho to retire 1 win shy of 900 as a yokozuna 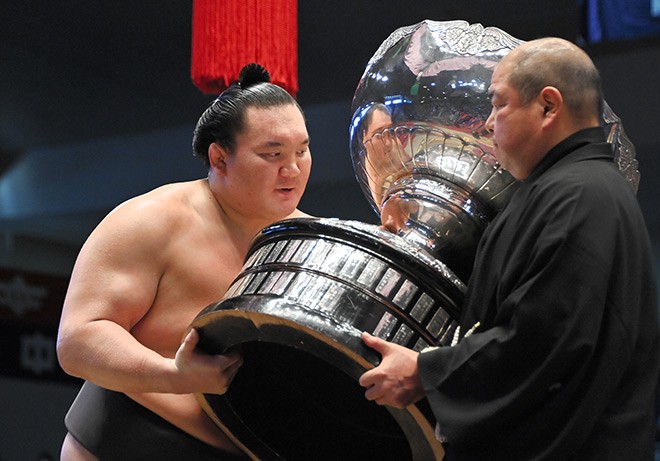 Yokozuna Hakuho receives the Emperor’s Cup from Hakkaku, chairman of the Japan Sumo Association, during the awards ceremony at the Nagoya Grand Sumo Tournament on July 18. (Asahi Shimbun file photo)

Yokozuna Hakuho, who won a record 45 career championships in an illustrious career that saw him dominate the sport for a decade, has decided to retire, sources said on Sept. 27.

Fittingly, Hakuho, 36, will go out on top after winning the Nagoya Grand Sumo Tournament in July with a perfect 15-0 record.

He has obtained Japanese citizenship to meet a requirement set by the Japan Sumo Association for becoming a stablemaster.

Hakuho had sat out six consecutive tourneys due to injuries to his right knee before his stunning triumph in Nagoya.

“This is my 899th win as a yokozuna,” Hakuho said in an interview after he was handed the Emperor’s Cup on July 18. “I’ll do my best to win one more bout to reach my 900th victory.”

But he dodged a question about his possible retirement, saying, “Let’s not talk about it. I need to take a rest for a while.”

Hakuho did not join practice matches for the Autumn Grand Sumo Tournament, which ended on Sept. 26, nor did he say whether he would participate in the tourney.

In early September, all 18 wrestlers of the Miyagino stable, including Hakuho, were forced to drop out of the fall tournament due to multiple COVID-19 cases in the stable.

Just after the 2020 November tournament, the JSA’s Yokozuna Deliberation Council issued a “caution” to Hakuho due to his numerous absences. It was lifted shortly after he won the 2021 July tourney, but the council criticized his rough and unorthodox tactics in the tournament.

The caution warning is the second severest one issued by the council following a recommendation to retire.

Hakuho was born in Ulan Bator on March 11, 1985. At the age of 15, he came to Japan to join the Miyagino stable on referral from Kyokushuzan, a fellow Mongolian and former komusubi.

Hakuho entered the sport in the 2001 spring tournament. He reached the highest makuuchi division in the summer of 2004 and was promoted to ozeki after the 2006 Spring Grand Sumo Tournament. He became the 69th yokozuna after winning the Emperor’s Cup in the 2007 summer tourney.

Hakuho also set records in remaining at yokozuna through 84 tourneys, winning 1,187 career victories, earning 1,093 wins in the makuuchi division and winning the most bouts over an entire year 10 times.