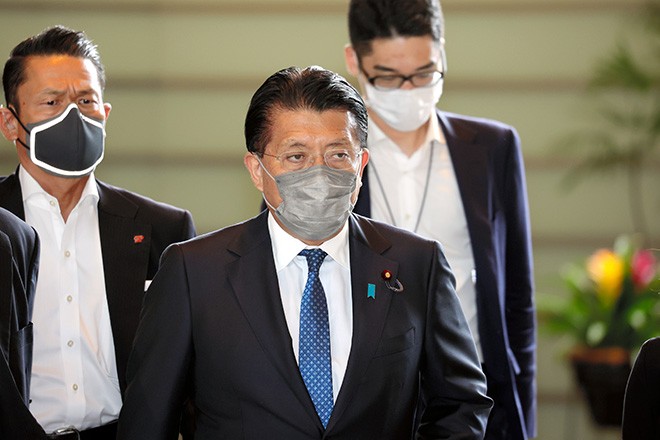 The Digital Agency on Sept. 27 said top officials attended dinner parties hosted by Nippon Telegraph and Telephone Corp. (NTT) but denied any serious ethical breaches because its chief has paid for the sessions.

The payment, from Takuya Hirai, minister of the newly established agency, came more than half a year after the parties were held and at a time when a magazine was about to expose the wining and dining sessions.

The agency said Koichi Akashi, 58, who is the No. 2 bureaucrat in the agency, attended three dinners with NTT officials, while Hirai was present at two of those sessions.

The agency on Sept. 24 announced that it had taken disciplinary action against Akashi, cutting his salary by 10 percent for a month. But it did not disclose who covered the costs of the dinner parties.

After reporters demanded more information, the agency on Sept. 27 tried to explain the matter once again.

According to the agency, Akashi received about a total of 120,000 yen’s worth of dinners, gifts and taxi fares in September, October and December 2020, when he was deputy director-general at the Cabinet Secretariat handling innovation.

Guests at the dinners in October and December included Hirai as well as Haruki Mukai, a senior official of the Cabinet Secretariat handling comprehensive IT strategy.

Mukai retired from the agency on Sept. 1 and is currently an adviser to the agency.

According to the agency, both Akashi and Mukai said they had expected Hirai to cover their share of the costs.

The Shukan Bunshun weekly magazine on June 23 this year published a scoop that Hirai had attended dinner sessions with NTT officials.

Two days before the article was released, the telecom giant billed the agency for the cost of these dinners.

Hirai on June 25 held a news conference and said, “I properly paid for the costs of myself and officials who also attended.”

He insisted that there was “no problem” because the bill was split and that he covered his end of payment.

But Hirai did not say when he made the payment.

The agency on Sept. 27 disclosed that Hirai paid up shortly after he received an inquiry from Shukan Bunshun for the article, four days before he held the news conference to say there was “no problem.”

Because of the long delay in payment, the agency concluded that the agency officials were practically entertained by the company.

But it also said they did nothing seriously wrong or illegal.

It said Hirai’s action did not infringe on the code of ethics for a minister, and that NTT was not a “stakeholder” concerning the positions of Akashi and Mukai.

However, the code of ethics for national government personnel prohibits employees from accepting entertainment that exceeds conventional wisdom, even from non-stakeholders.

Hirai acknowledged at a Sept. 28 news conference that Shukan Bunshun had contacted him for the story before he made the payment to NTT.

“I checked with NTT, received a bill and paid on June 21,” he said. “I should have paid sooner.”

He added that he could not pay until NTT sent him the bill.

Hirai also said the dinners took place at an NTT facility, not a restaurant, for “general exchanges of opinions,” and, therefore, did not infringe on the code of ethics.

But he said he will return one month of his salary as a minister because he was, to some extent, responsible for attending the dinners.

An NTT representative on Sept. 27 acknowledged that dinners were held with the agency officials but declined to comment on the details.

“We deeply regret that we were naive about the National Public Service Ethics Law,” the representative said. “We will implement thorough wining-and-dining rules and take preventive steps.”

(This article was written by Emi Hirai and Yoshikatsu Nakajima.)