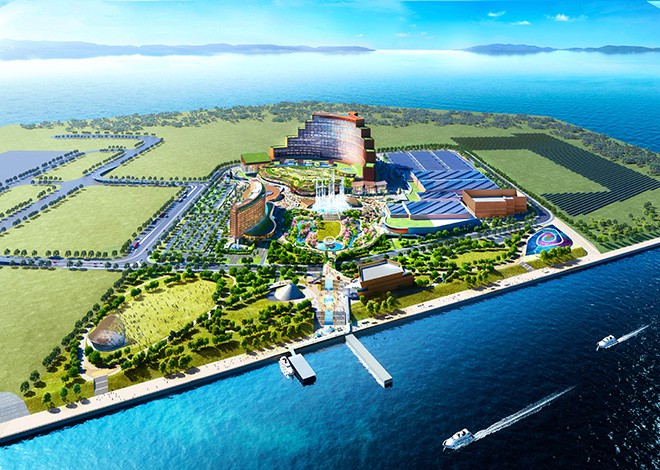 A rendering of an integrated resort that is expected to be built in Osaka’s Yumeshima island district ((c)2021 MGM Resorts International and ORIX Corporation. All rights reserved.)

A consortium of the two companies will make the initial investment of 1.08 trillion yen ($9.7 billion) to build the resort in the Yumeshima island district.

The consortium was the sole bidder in the process.

A selection committee, consisting of government officials and experts, reviewed the companies' proposal.

On Sept. 22, the committee submitted a report to the governments praising the plan as “extremely ambitious” and aiming to “elevate the urban brand power of Osaka to the next level through global competitiveness.”

According to a summary of the consortium’s plan that the governments released, the proposed resort will have a conference facility with a maximum capacity of more than 6,000 people, a facility with a 20,000-square-meter exhibition space, an accommodation facility with 2,500 rooms and a casino, from the get-go.

About 20.5 million visitors are expected to come to the resort annually, of which 14 million will be domestic visitors, while 6.5 million will come from abroad.

The proposal promises to create 15,000 or so new jobs

The local governments in February said the development of an integrated resort can be done gradually to decrease the initial investment due to the novel coronavirus pandemic.

But the proposal from MGM and Orix will likely meet most of the conditions that the local governments have requested as soon as the resort opens.

The stipulations include a facility with a 100,000-square-meter exhibition space and an accommodation facility with more than 3,000 rooms.

The land minister will grant permission for up to three locations in the nation to host casino integrated resorts.

An IR project in Yokohama was scrapped after the recent mayoral election, in which a candidate opposed to the project defeated the pro-casino incumbent.

Wakayama and Nagasaki prefectures have also sought to build an IR.