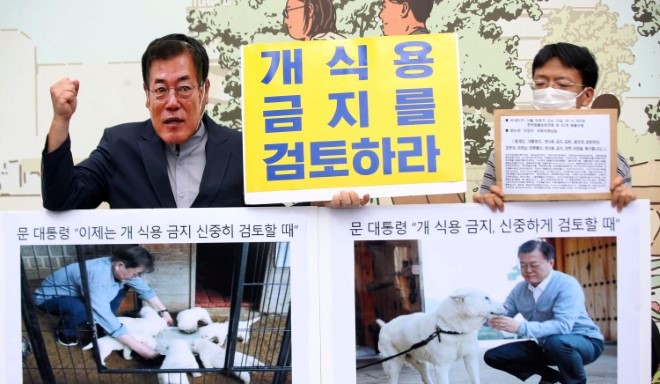 Dog meat is neither legal nor explicitly banned in South Korea. Restaurants that serve it are a dwindling business here as younger people find dog meat a less appetizing dining option. But some people oppose a ban as a surrender to Western pressure.

During a meeting with his prime minister on Monday, President Moon Jae-in asked “if it’s time to carefully consider” a ban, according to his office. It’s unclear when a review would take place and when or whether a ban would be realized.

A few activists gathered in central Seoul on Tuesday to call for the government and parliament to work out steps to officially prohibit dog meat consumption. They placed a big placard on the street that reads “Legislate law banning the slaughters of dogs and cats!”

“We actively welcome President Moon Jae-in’s comments instructing a review of the dog meat consumption ban and hope there would be substantial progress on that,” animal rights organizations said in a joint statement.

A public survey in 2018 indicated about 80 percent of South Koreans had not eaten dog meat in the previous year. Lee said an estimated about 1 million dogs are still killed each year in South Korea for food.