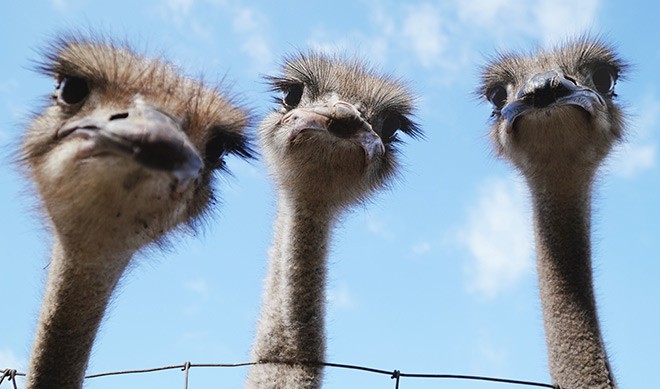 The ostrich, being the world’s largest bird, naturally lays pretty big eggs, each equal to the size of about 25 chicken eggs.

Eggs, which can be as heavy as 1.5 to 2 kg, won’t break even if an adult man stands on one as their shells have a thickness of about 2 millimeters.

In early September, five chicks were born at the Ishioka Ostrich Farm in Ishioka, Ibaraki Prefecture, which raises hundreds of ostriches.

Chicks weigh approximately 1 kilogram at birth, but they will be as large as adult birds in about a year, according to farm manager Masaru Sasao.

When the chicks, 10 days old, were put in an enclosure surrounded by iron fences on Sept. 16, they seemed nervous about the unfamiliar environment and made whistling noises.

“Ostriches have no vocal cords, so they don’t cry or sing,” Sasao said.

Known for their long necks and legs and big wings, ostriches live in herds in African savannas and deserts.

Generally, adult birds stand up to 2.5 meters tall from head to toe and weigh up to 180 kg.

Though they can’t fly, the herbivorous birds are the fastest bipedal land animal with the ability to run at 60 to 70 kph and maintain a speed of 40 kph for two hours.

They also have great eyesight and can detect an ant moving in a spot 40 meters away.

“Ostriches are cautious and timid, but they’re also curious about everything and friendly,” Sasao said.

In Japan, they lay between 40 and 50 eggs from spring to autumn. The farm uses incubators to artificially hatch eggs because it is difficult for eggs to hatch naturally due to the high humidity and abundant rainfall.

Livestock farmers have also been turning to breeding ostriches as it is easy to do so since the birds are less odorous than other domestic animals and are resistant to heat and cold.