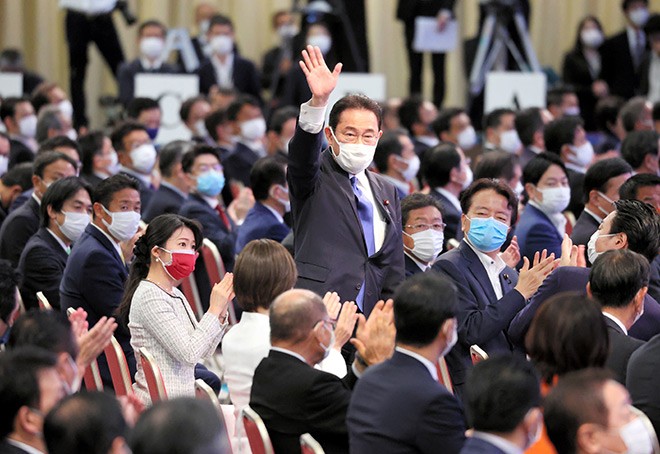 Fumio Kishida won the presidency of the ruling Liberal Democratic Party in a runoff vote on Sept. 29 and is now set to become Japan’s next prime minister.

Kishida, 64, a former LDP policy chief and foreign minister, gained the most ballots in the first round of voting but they were not enough for a majority. That forced a runoff with second-place Taro Kono, 58, the state minister in charge of administrative reform.

The other two candidates in the race were Sanae Takaichi, a former internal affairs minister, and Seiko Noda, the LDP executive acting secretary-general. This was the first LDP presidential election with more than one female candidate.

Kishida will be formally voted in as prime minister in the extraordinary Diet session to be convened on Oct. 4. He will then have to lead the LDP in the Lower House election that must be held this autumn.

Kishida clearly had that in mind when he addressed his fellow LDP lawmakers after his victory was declared.

“We have to show the general public that ‘the LDP has been reborn,’” Kishida said. “Let us all work together as one team to win the Lower House election and Upper House election (that must be held in summer 2022).”

At a later news conference, Kishida was asked what his goal was for the Lower House election.

He said he aims to have the ruling coalition win a majority of seats to maintain its control of the government.

After his LDP election win, the new party chief said he would put together a package of economic measures before the end of the year totaling several tens of trillions of yen to deal with the novel coronavirus pandemic.

He added that other policy areas that he would immediately work on after becoming prime minister were establishing a new capitalism, creating a free and open Indo-Pacific region and implementing measures to deal with the nation’s declining birthrate.

Many political pundits had expected Kono to win the first round by using his general popularity to gain prefectural chapter votes that were distributed based on ballots cast by rank-and-file party members and supporters.

Votes were weighted equally in the first round between LDP lawmakers and the rank-and-filers and supporters through the 47 prefectural chapters.

In the runoff, the lawmakers accounted for about 90 percent of the ballots, and they rallied behind Kishida to push him further ahead of Kono and into the LDP president’s post.

During the LDP presidential campaign, Kishida argued for a more neo-liberalist economic policy.

Kishida also called for the establishment of a “health crisis management agency” to deal with the novel coronavirus pandemic.

Kishida represents the No. 1 district of Hiroshima Prefecture and has been elected nine times to the Lower House.

In 2012, he became the head of the LDP faction that has produced such prime ministers as Hayato Ikeda in the 1960s, Masayoshi Ohira in the 1970s and Kiichi Miyazawa in the 1990s.

The LDP presidential election was held after Prime Minister Yoshihide Suga announced that he would not seek a second term as party leader.

The four-way race was a highly unusual one because none of the major factions, except for the Kishida faction, came out to support a single candidate.

That made it difficult to predict how LDP lawmakers would vote in the first round.

In last year’s LDP presidential race, all major factions quickly announced that they would back Suga, so the outcome was essentially determined even before campaigning officially began.