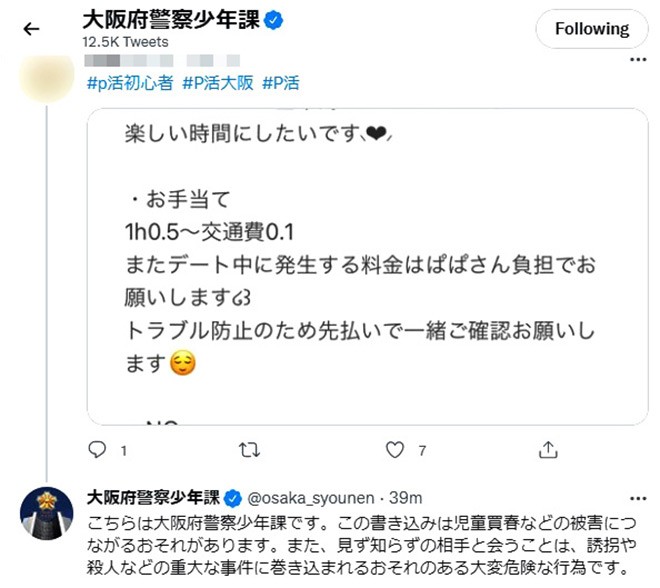 The Osaka prefectural police’s juvenile section sends a warning to a Twitter user who offers dating and other relationships in exchange for money. (Captured from Twitter)

OSAKA—A woman and a man have been arrested on suspicion of defrauding two “sugar daddies” in their 60s through a paid dating practice called “papa katsu,” police said Sept. 28.

The suspects--Erina Nishimura, 27, an unemployed woman, and Kiyokazu Yoshida, 50, a self-proclaimed investor—are accused of swindling a total of 23.5 million yen ($210,710) from the two men.

Osaka prefectural police say the suspects could be connected to other reported dating scams that netted about 300 million yen from around 40 men in their 50s to 70s.

Police did not say if the suspects, who both reside in Yao, Osaka Prefecture, have admitted to or denied the allegations.

Under papa katsu, literally “daddy activity,” young women go out with and establish relationships with older men in exchange for financial benefits.

According to police, Nishimura and Yoshida searched for older men on social media for the purpose of defrauding them through paid dating.

They allegedly posted messages under the name of “Saki,” a common name for women in Japan, investigators said.

“I like older men and went out with men in their 60s in the past,” one of the posts read.

The two were first arrested on Sept. 7 on suspicion of defrauding a man in his 60s who had agreed to meet Nishimura for papa katsu. He loaned Nishimura 7.5 million yen after she asked for help to repay her scholarship loans.

He contacted the Yao Police Station in January after realizing that he may have been scammed.

The suspects were rearrested on Sept. 28 on suspicion of swindling 16 million yen from another man in his 60s between June and July.