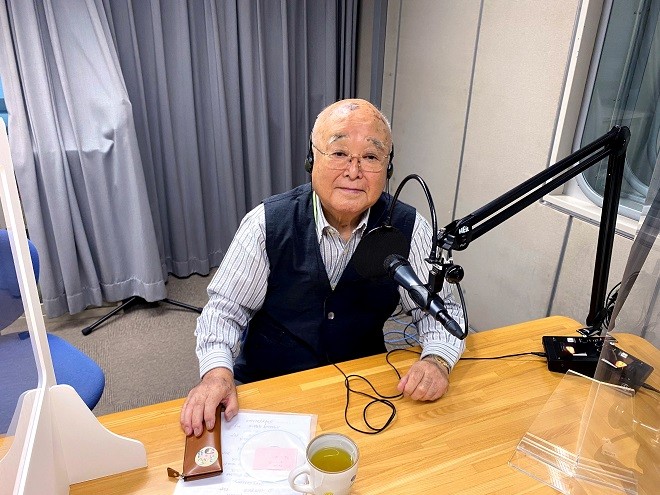 It started a life-long love for Western music and led to his ongoing role as a radio personality.

Even now at 92, Ino, known on-air as “Uncle Mike,” remains determined to “continue my mission of conveying the appeal of Western songs to as many listeners as possible for the rest of my life.”

Ino was born in Incheon on the Korean Peninsula when it was under Japanese colonial rule. He heard “Goodnight, Irene” while listening to a record player at a friend’s home.

After the war ended, Ino moved with his family to Japan, still carrying the music bug.

He started visiting vinyl record stores to immerse himself in music from Europe and the United States and has since amassed 8,000 albums on vinyl and CD.

As president of an ad agency, Ino often visited a TV station, which asked him in 1983 to host a new local radio program to introduce Western music.

Since then, Ino has been playing Western tunes at the MRT Radio studio.

He has hosted a one-hour, weekday live show at night for 35 years, and is currently also responsible for a 10-minute show aired every weekday morning.

He mostly plays rock and soul music from the 1950s to 1980s, but he has also spun hip-hop and reggae on his shows.

Every time Ino thinks that a melody or lyrics could meet Japanese listeners’ tastes, he chooses the song from his collection for his shows.

“I cannot inject my soul into the pieces unless I buy them out of my own pocket,” he said. “Were it not for the radio programs, I might have been unable to live to be 92 years old.”

His love of music goes beyond sound.

Ino delves into magazines and books to deepen his knowledge about music and explain scores in more detail to his listeners.

Ino said he also believes that a favorite tune can promote longevity.

“It is difficult to select the best from among so many good songs, but my favorite, ‘Goodnight, Irene,’ is the greatest,” he said, smiling.