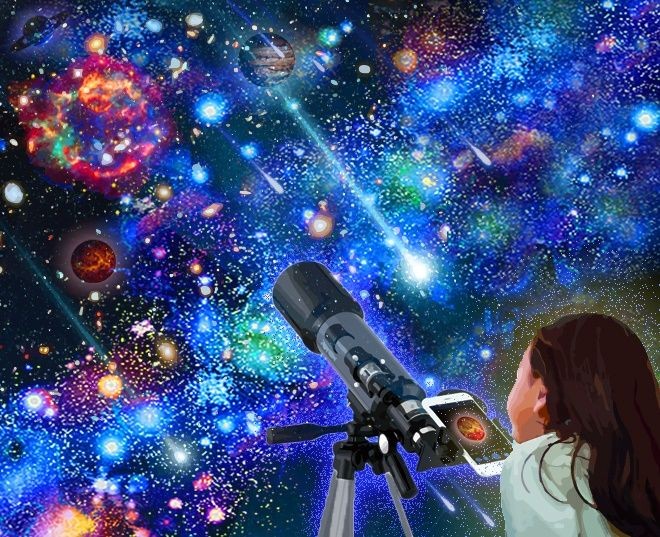 Way back then
until death, I will love
cosmos in the wind
--Noma Minako (Matsuyama)

now and then
in the field of lavender
the echo of the wind
--Francoise Maurice (Draguignan, France)

waves of wheat--
taste of the sea
in her kiss
--Olivier-Gabriel Humbert (Les Avenieres, France)

The haikuist was swept away by a meteor shower. Teiichi Suzuki’s house lies under a path airplanes take from Kansai International Airport. Douglas J. Lanzo penned his haiku with the flourish of a lawyer’s quill at home in Chevy Chase, Maryland.

Scattered
from the galaxy
the lights of night flights

Eva Limbach stood outside to admire stars over Saarbrucken, Germany. Mark Thomas Manalang spent a star-spangled evening in Baguio, Philippines. In Cordoba, Argentina, Julia Guzman learned how the cosmos blooms for as far as the eye can see. Satoru Kanematsu has no need for a watch; he has afternoon-blooming flowers and reliable delivery in Nagoya. Mirela Brailean watched reflections of star-shaped flowers fold their blooms at dusk in Iasi, Romania.

cosmic void
on my skin a lingering
mosquito bite

cosmos in bloom--
mother describes them
in sign language

German poets Pitt Buerken from Munster and Claudia Brefeld from Bochum, respectively, exclaimed as if they were explorers in the Amazon.

at length!
the river issues
into the sea

Amazon fires--
my thoughts flee
to the Milky Way

Kristen Lindquist may have felt her throat burn a bit on the way down as she knocked back a shooter in Camden, Maine. In addition to its vitamins and sour taste, Suzuki thinks citrus acid can sterilize fresh fish and oysters in Osaka. Zdenka Mlinar cleansed in Zagreb, Croatia.

anti-vaccine
the kitchen breathes the colors
and smells of citrus

pouring limoncello
by the Grand Canal
a painter painting sunlight

evening on the pier:
the sails rest
on the shoreline

the seagulls above
follow as we sail
without a map

joining the dots
on the horizon
me and my sailboat

sickle moon--
on the horizon
a sailboat

wait for me
I walk through the constellations
to infinity

Michael Feil lamented how grandchildren in Berwyn, Pennsylvania, lost the chance to make childhood memories during the pandemic. As the sun dipped below the horizon, Patrick Sweeney offered a bedside invocation. Orihara worried when her mother “kept saying she was ready for her final moment.” When “her long wait and sudden departure” finally came, it left an indelible impression on the haikuist. Brailean reflected on what more she could have possibly said to her mother.

closing the cottage:
packing the wind chimes
with the wind

leaving my hometown...
the stars will be waiting
for my return

No more cars
in the parking lot
dragonflies

Ashraf wondered what might happen next in Rawalpindi, Pakistan. John Daleiden learned how to survive in the Sonoran desert.

child custody day
rolling down the alley
a tumbleweed

desert hike--
in its shade, I drink
from a Saguaro

Cupping her palms, Stania is in control of life in Ettiswil, Switzerland. Having traveled far from his home in Fukuoka, Yuji Hayashi spotted his destination while stopping for a drink. Veronika Zora celebrated her birthday today in Toronto, Canada.

mountain lake
a sip
from my hollow hand

glass of lemonade…stirring the mystic cry
of a loon

high in the sky
above endless fields of wheat
southbound cranes

harvest moon
along the ancient ridgeline
turbines thresh the stars

Manalang recalled a special person who left him to go overseas and never returned. Kanematsu cherished a dramatic finish.

Roberta Beach Jacobson left this one line on a sour note in Indianola, Iowa: warm lemonade no tip. Levine relaxed with a warm cup of tea in Wenham, Massachusetts. Salil Chaturvedi bid adieu in Goa, India. Orihara regrets not having the chance to say goodbye during COVID-19 in Atsugi, Kanagawa Prefecture. Albertus Hariantono swallowed bitterly in Malang, Indonesia.

Final goodbye--
the ice melts
in her lemonade

spilled trash
in front of the house
my iced green tea

The next issues of the Asahi Haikuist Network appear Oct. 15 and 29. Readers are invited to send haiku about burning farmer’s fields or scarecrows on a postcard to David McMurray at the International University of Kagoshima, Sakanoue 8-34-1, Kagoshima, 891-0197, Japan, or by e-mail to mcmurray@fka.att.ne.jp.