Low-key style of Kishida molded by politicians in Hiroshima 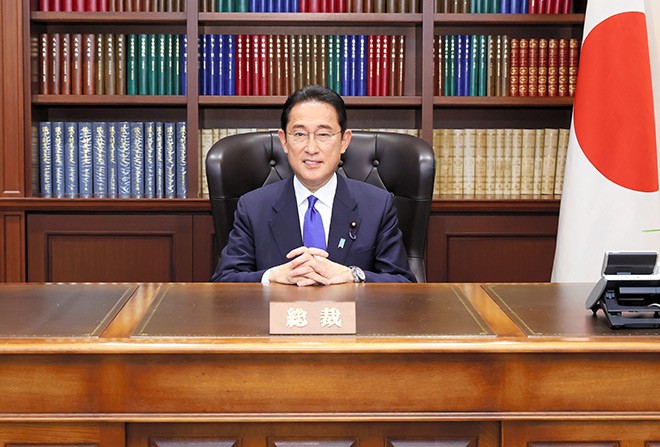 Fumio Kishida sits at the desk of the president of the ruling Liberal Democratic Party on Sept. 29. (Hikaru Uchida)

Fumio Kishida has long been described as low-key and humble, even during his rise through the ranks of the Liberal Democratic Party.

One influential supporter even told Kishida that those unexciting traits would hurt his chances to reach the pinnacle of Japan’s political world.

But Kishida on Sept. 29 defeated his more “outspoken” and “maverick” rivals to win the ruling LDP’s presidential election, ensuring that he will be named prime minister of Japan.

Kishida’s character was molded by his ties to Hiroshima in western Japan.

His office in the city has three photographs of politicians with connections to Hiroshima.

One photo is of his father, Fumitake, and another shows his grandfather, Masaki, both of whom served in the Lower House.

The third photo is of former Prime Minister Kiichi Miyazawa.

One local source said the photos have “served as the role models for the politician Fumio Kishida.”

Fumitake was related to Miyazawa and had long supported him in the LDP faction established by Hayato Ikeda, another Lower House member from Hiroshima Prefecture who became prime minister in 1960.

Fumitake, who had been elected five times to the Lower House, died of illness the following summer in his mid-60s.

One colleague who spoke at a memorial ceremony in the Diet said Fumitake had always thought that his next role would be as a Cabinet minister.

Fifteen years after his father’s death, Fumio Kishida earned his first Cabinet post, state minister in charge of Okinawa and Northern Territories affairs, in the Shinzo Abe administration in 2007.

In a sense, Kishida at age 50 had surpassed his father.

From around that time, Kishida frequented a ramen shop near his Hiroshima office. But rather than order the Hiroshima-style bowl with all the toppings, Kishida chose a simple ramen that was 200 yen ($1.80) cheaper.

And he would always sit at a smaller table, even as more aides and security police accompanied him as he rose through the political ranks and was named to important posts.

In 2012, Kishida took over as head of the faction that had been started by Ikeda and was once led by Miyazawa.

At faction meetings, Kishida would often reflect on what Miyazawa said: “Those in power must always be humble.”

Kishida served four years and seven months as foreign minister, the second longest tenure in the postwar era. In that post, he welcomed U.S. President Barack Obama to Hiroshima and explained the various sites around the Hiroshima Peace Memorial Park in 2016.

Around that time, Kishida began mentioning his ambition to become prime minister.

Gakuhito Ito, 72, who chairs Kishida’s Hiroshima support group, was encouraged by that change.

But after watching Kishida on TV programs, Ito felt the hopeful for prime minister was too serious and lacked dynamism.

At a meeting in March attended by Diet members and Hiroshima business executives, Ito scolded Kishida for acting only within an established framework.

Kishida took the advice in stride.

Those who know Kishida well say that beneath his calm exterior is a relentless drive to succeed.

Kishida, a graduate of the prestigious Kaisei Senior High School in Tokyo, was a member of the school’s baseball team for three years, along with Koji Hayashi, 64, now president of the German holding company subsidiary of Mitsubishi Paper Mills Ltd.

Whenever Hayashi sees his classmate on the news, he remembers those times many decades ago when they endured strenuous baseball practice.

Kishida was the starting second baseman, and Hayashi recalls him running until he collapsed to conclude each day’s practice.

“No matter how far behind he was, he never slacked off and ran until the very end,” Hayashi said. “Kishida always reached the finish line.”

(This article was written by Nana Miyagi, Takahiro Okubo and Shohei Sasagawa.)