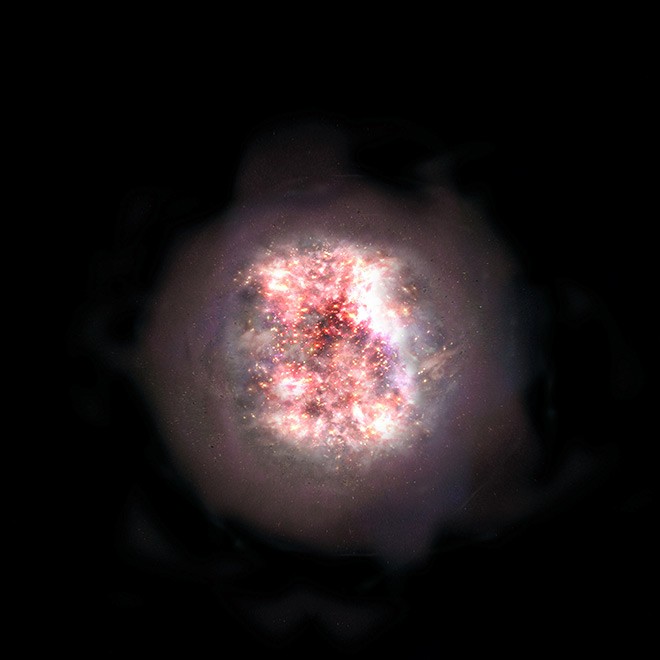 Astronomers by pure chance detected a previously unknown galaxy 13.1 billion light-years away that is invisible at optical wavelengths due to clouds of cosmic dust.

Scientists from the National Astronomical Observatory of Japan and other institutions made the discovery when they trained the ALMA radio telescope in Chile on galaxies in the Cetus constellation.

“We were astonished because this was completely unexpected,” said Yoshinobu Fudamoto, who is part of the ALMA Project as a specially appointed researcher. “Our future challenge is determining whether these dust-obscured galaxies represent just the tip of the iceberg.”

The astronomers found radio waves coming from a region where nothing had been detected via visible light imaging with the Hubble Space Telescope.

They concluded that a blanket of dust generated by star explosions and other events is hiding galaxies by blocking visible light.

One of the newly discovered galaxies is 13.1 billion years old. The scientists believe that infrared rays, which pass through dust grains, were identified as radio waves apparently because their wavelengths grew longer over the course of 13.1 billion years.

In terms of mass and other elements, the dusty galaxies are comparable to their common counterparts that formed shortly after the birth of the universe.

However, the scientists said they remain puzzled why such a large volume of dust was scattered and buried the galaxies, given that only young stars existed in the early universe immediately after the Big Bang.