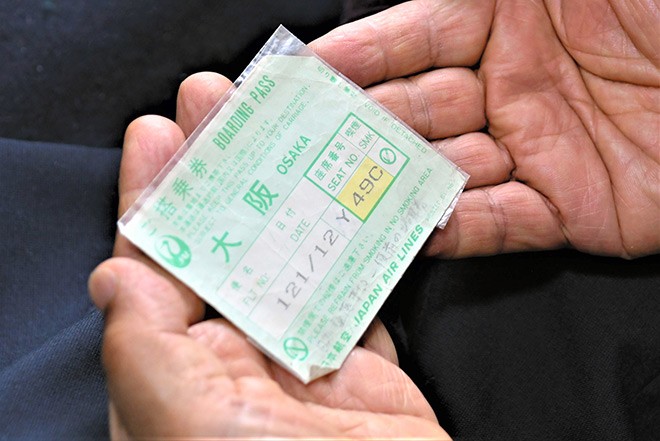 Seiichi Murao is overcome with mixed emotions every time he thinks about a decision 36 years ago that almost certainly saved his life.

The calligrapher, now 81 years old, flew home from Tokyo’s Haneda Airport on Aug. 12, 1985, after switching his ticket for an earlier flight.

Later that evening, Murao learned that Japan Airlines Flight 123, for which he was initially booked to travel, had plowed into a ridge of Mount Osutakayama in Ueno, Gunma Prefecture, resulting in the worst single-aircraft disaster in aviation history. The crash claimed the lives of 520 passengers and crew members. Only four people survived.

Murao still wonders whether a young couple and their two children he met at Haneda Airport had left with him on the same flight or taken Flight 123.

Murao was returning to his home in Mino, Osaka Prefecture, after attending an awards ceremony for a calligraphy exhibition in Tokyo.

Arriving at the airport earlier than expected, Murao changed his ticket after he learned of an available seat due to a cancellation.

While waiting in line at the security check, he noticed the family of four standing in front of him. The children appeared to be of elementary school age, and one of them was holding a fish tank. Murao assumed they might have caught fish during their summer break.

He heard an airport staff member suggesting to the family that they take the next flight on grounds it would take time to confirm whether they could board the aircraft with the fish tank. Murao passed the family and went through the gate.

When he returned home that evening, his wife asked him how he had come back, with a threatening look on her face.

Baffled by her question, Murao was lost for words. For some reason, he fibbed and told his wife he took a Shinkansen bullet train.

When he glanced toward the TV in the living room, everything became clear. A newscaster kept repeating: “A Japan Airlines flight has disappeared from radar.”

Murao’s air ticket was stamped “121,” evidence that he escaped the tragic flight by a whisker. Loath to part with the ticket, he kept it in his wallet.

He couldn’t stop wondering, “What if I had taken Flight 123 as planned?” and whether that family had taken the same flight.

Murao couldn’t bring himself to talk about his experience to anyone. It took nearly five years before he was able to summon up the courage to share his feelings with his family.

In the years that followed, Murao made a point of climbing to the mountain ridge each year to visit the crash site.

Unable to speak to bereaved family members making a memorial climb on anniversaries of the disaster, Murao ascends the trail in silence. He also observes the memorial service held at the foot of the ridge from a distance, reflecting on the lives lost while his was spared.

Murao was diagnosed with cancer seven years ago.

He created a piece of calligraphy and painting for the first time to express his feelings about the tragedy, thinking it might be his last chance to hold a solo exhibition.

The work, displayed at an exhibition in 2015, features the word “Chinkon” (repose of the souls) written in ink in large characters, with the cenotaph standing at the foot of the ridge seen in the background.

Murao also placed his plane ticket in one corner of the venue.

In July, Murao visited the cenotaph again. All he could hear was the sound of his feet crunching on the gravel and the buzzing of cicadas.

“I’ll keep working hard,” he said as if talking to the victims.

As he burned incense for the repose of the souls, a thin plume of smoke rose into the air and disappeared into the blue sky.

Murao took out the ticket and stroked it with his fingers as if to check that he still had it before gently tucking it away in his wallet.