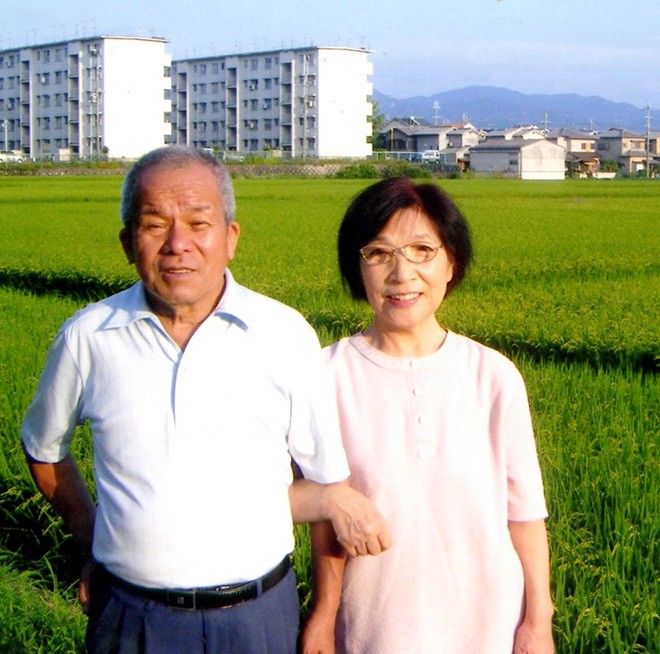 Tamotsu Nishihata, left, and his wife, Kyoko, around 2009 (Provided by Nishihata)

A man who went through most of his life unable to read or write worked tirelessly through night classes so he could one day write a love letter to his beloved wife.

But he never thought that his romantic gesture would be immortalized in a rakugo play.

Now that a traditional storyteller inspired by his tale has turned it into a nonfiction rakugo act, Tamotsu Nishihata, 85, hopes it will broaden public understanding about people who struggle with illiteracy.

Nishihata, who lives in Nara, dropped out of school after he was bullied in the second grade. He helped his family’s charcoal business and began working away from home when he was 12.

Nishihata was afraid of answering the phone at a restaurant he worked because he could not write. Staff yelled at him whenever he failed to write down delivery orders.

“Some staff wrote them for me, but others moved away when the phone rang,” he said. “I felt so miserable and quit the job.”

He frequently changed jobs, but finally landed a gig in his 30s at a sushi restaurant that understood and sympathized with his challenges.

Nishihata met his wife, Kyoko, when he was around 35. He fell in love with her at first sight during their "omiai" (marriage matchmaking) meeting.

Even after they got married, he tried to keep his inability to read and write secret from her. He told her that he was going to a restroom when they went to check in at a hotel during their honeymoon trip.

But she learned about it six months later. Nishihata expected she would ask for a divorce.

Ever since, she had accompanied him on visits to government offices, banks and hospitals. She also wrote documents for him when necessary.

“I can’t imagine my life without her,” he said. “She was the best wife.”

Nishihata retired from his job at the sushi restaurant in 2000, when he was 64. The same year, he began taking evening classes at the municipal Kasuga Junior High School in Nara to write to Kyoko to express his gratitude.

He attended night school five days a week to study Japanese from the basics. He found joy in learning as he became able to read newspaper articles.

Using the dictionary, he wrote a seven-page love letter to Kyoko and handed it to her on Christmas Day in 2007, when he was 71.

“I am here because of your support,” the letter read.

With tears in her eyes, Kyoko told him, “You did a good job.”

She passed away in 2014. But Nishihata continued taking evening classes and graduated from the school in spring last year. He now loves writing and working on essays.

Rakugo storyteller Shofukutei Teppei, who learned about the couple’s story, was so touched by the deep bond between the two that he wrote to Nishihata to meet with him and made it into a nonfiction rakugo story.

“I never thought in my wildest dream that my life would become the subject of rakugo,” said Nishihata. “I hope the rakugo story will help people understand the hardships of those who can’t read or write for various reasons and hide it from the public.”

Teppei will perform the rakugo story at the Mokubatei theater in Tokyo on Oct. 21 and at Asahi Seimei Hall in Osaka on Nov. 7. Nishihata said he plans to see the rakugo play.