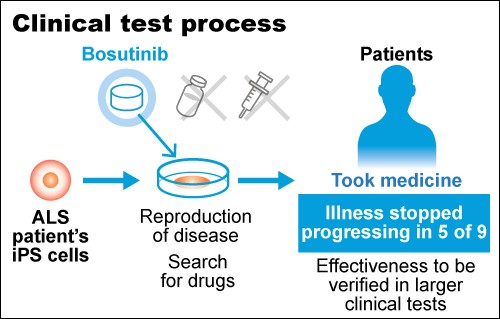 A Kyoto University-led research team said its studies on iPS cells pinpointed a medicine that halted the progression of amyotrophic lateral sclerosis (ALS) in patients for the first time in the world.

The researchers on Sept. 30 said their finding cannot yet be labeled a cure for ALS, given the small sample size in the clinical tests, but it does raise hopes of saving people from the neurodegenerative disease.

“We had only a small number of test subjects,” said team member Haruhisa Inoue, a professor of neuroscience stem cell medicine at Kyoto University’s Center for iPS Cell Research and Application. “But there is now a higher possibility that science can beat (ALS).”

ALS, also known as Lou Gehrig’s disease, causes a loss of motor neurons. Muscles can then waste away, leading to difficulties in moving and eventually an inability to breathe.

Inoue and the other researchers reproduced the disease through iPS cells derived from patients’ skin.

They tested existing medicines that were designed for other illnesses on the sick cells, and found that Bosutinib, a drug for leukemia patients, was the most promising.

Nine ALS patients took 100 to 300 mg of Bosutinib per day for 12 weeks. ALS progression stopped in five of them.

“What happened was a phenomenon not normally seen,” Inoue said.

But the disease progressed at its usual pace for the four other patients.

One patient who took 400 mg per day developed a liver disorder, so the medication was stopped. Leukemia patients who have taken Bosutinib have also suffered from that side effect.

The test subjects were all in the early stages of progressive ALS development.

The clinical tests were conducted mainly to ensure the safety of Bosutinib, so the team could not judge statistically whether the medicine was effective against ALS.

The team plans to conduct larger clinical tests to determine the drug’s effectiveness, the possible side effects, which patients should receive the medicine, and the proper doses.

Existing treatments can slow down the progression of ALS, but no cure has been found.