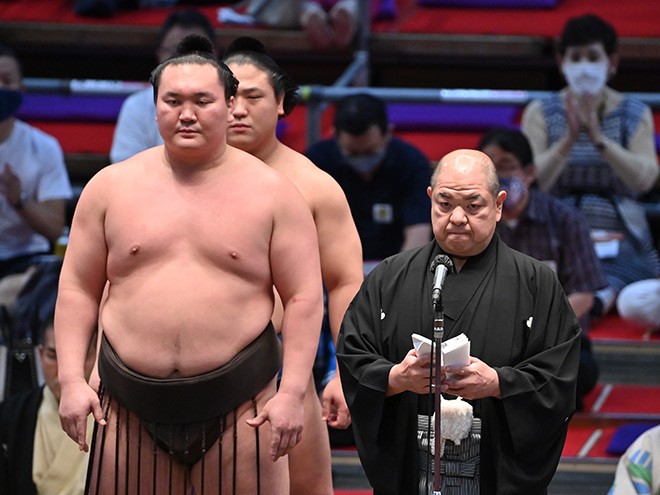 Yokozuna Hakuho, left, listens to an address by Hakkaku, the chairman of the Japan Sumo Association, on the first day of the Nagoya Grand Sumo Tournament in July. (Kotaro Ebara)

If retiring yokozuna Hakuho, considered the greatest sumo wrestler of all time, wants to remain in the sport and become a stablemaster, he's been told that he needs to clean up his act.

The Japan Sumo Association has taken the highly unusual step of asking Hakuho to sign a pledge that he will not harm the ancient sport once he becomes a stablemaster.

The move is a reflection of the concerns held by JSA officials about Hakuho’s failure to kowtow when disciplined in the past for behavior unbecoming a yokozuna, who should serve as a role model for all other lower-ranking wrestlers.

The JSA directors approved Hakuho’s retirement and his taking the stablemaster name of Magaki at a meeting on Sept. 30.

But, in exchange, Hakuho was asked to sign a pledge saying he would not repeat past actions that were criticized by JSA officials.

In one instance, Hakuho asked the audience to join him in three banzai cheers after he won the Kyushu Grand Sumo Tournament in November 2017.

He was given a warning, but in April 2019 the JSA reprimanded Hakuho for asking fans to join in a hand-clapping ritual following his winning of the Spring Grand Sumo Tournament in March 2019.

The hand-clapping ritual is often conducted at conclusions of major events in Japan. However, in sumo tradition, a tournament is not deemed to be over at the trophy ceremony, but only after a ritual is conducted later to see off the gods until the next tournament.

Hakuho’s more recent actions apparently led to the seeking of a pledge signing.

Stablemaster names are regularly passed on from one sumo wrestler to another.

When Hakuho obtained the Magaki name in May 2021, JSA officials asked that he refrain from rough tactics in the dohyo considered unbecoming of a yokozuna, such as slapping an opponent’s face with an open hand at the initial charge.

But in the Nagoya Grand Sumo Tournament held in July, Hakuho resorted to some of those same roughhouse tactics as he went on to claim his record-extending 45th career championship.

In addition, Hakuho has also displayed open dissatisfaction when he was defeated in a bout, such as raising his right arm in protest at what he perceived as a false start in a November 2017 bout.

The pledge contained two conditions that Hakuho would have to keep to hold the Magaki stablemaster name. One was that he carry out the duties assigned to various stablemasters in organizing sumo tournaments and other events, while the other was to not act in a way that wavered from the “spirit of the way of sumo.”

Initially, Hakuho will work as a stablemaster at his old stable of Miyagino.

Some JSA officials who were looking into whether he should be allowed to take over the Magaki name suggested that he undergo instruction on becoming a stablemaster within the Miyagino stable for a decade before opening up his own stable.

Shibatayama, the JSA director in charge of public relations, said the pledge signed by Hakuho was a first. He added that if Hakuho failed to abide by the two conditions, there was the possibility that a JSA committee could reconsider the approval of his taking over the stablemaster name.

He added that Hakuho showed no objection to signing the pledge.