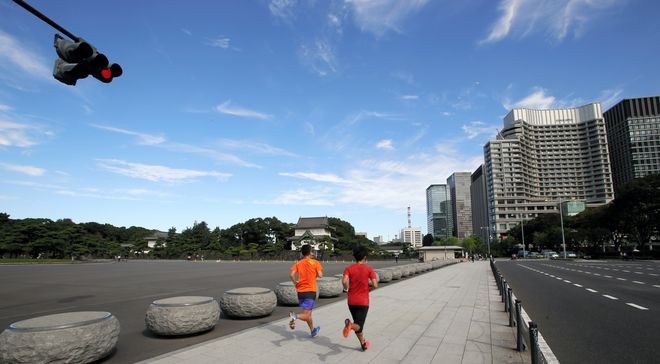 Contemplating working up a good sweat at the gym or jogging outdoors after work, then think again.

Now that teleworking is the norm in much of the developed world, researchers caution that people who spend most of the workday in a seated position should think twice about suddenly working out to maintain their health.

The surprise finding by Teruhide Koyama, a lecturer of public health at Kyoto Prefectural University of Medicine, and his colleagues followed a long-term study of 60,000 individuals.

“The novel coronavirus crisis has exerted long-term effects on people’s health in a range of respects, aside from its direct infection-related impact,” Koyama said. “We need to continue paying careful attention to this issue.”

Past studies outside Japan suggest that sitting longer contributes to a higher risk of disease and early death due to disturbed blood flow and lowered metabolism. But no large-scale surveys targeting Japanese patients had been carried out before.

For that reason, a team headed by Koyama analyzed data collected by questionnaires and other means over several years about the health condition and lifestyles of 60,000 adult men and women so correlations between time spent seated and the mortality risk could be determined.

The findings show that the rate of death was 1.2 times higher for people who remain seated for seven to less than nine hours daily, compared with those who are seated for less than five hours a day.

Staying seated for nine hours or more raised the ratio by 1.5 times compared with that of the shortest-sitting group.

Overall, the fatality risk increased 15 percent for each additional two hours spent sitting each day. The risk of death increased if the individual suffered from one or more disorders such as high blood pressure, lipid abnormalities and diabetes.

The researchers also checked whether doing exercise after work hours was helpful in lessening the mortality risk. They discovered that the likelihood of death was reduced through bodily activities by a paltry 3 percent even for the most physically active group of people.

“Working out properly is itself a good custom but the negative effect of sitting longer remains afterward,” said Koyama, arguing that engaging in physical activities alone is not enough to mitigate the health risk.

Given that teleworkers are prone to spend hours at a time in a seated posture, Koyama’s team also analyzed data on 10,000 people who took part in an online survey.

The study was set up by Takahiro Tabuchi, a doctor of public health at the Osaka International Cancer Institute, and others to track changes in people's lifestyles and economic circumstances after the COVID-19 pandemic struck.

Koyama and his peers compared the time those who continued to commute to the office during the state of emergency starting in April 2020 spent seated with that of employees who opted to telework as well as the time they spent seated after the restriction was lifted the following June.

The results showed that, among at-home employees, the ratio of those who sat two or more hours longer than at the time of no restrictions was 2.14 times higher than that of those who continued to turn up at the office.

The finding corroborated a widely held notion that teleworkers tend to work in a seated position for more hours than those who still show up for work.

Asked how to lower the risk of death, Koyama cited two basic precautions: “taking steps to spend less time sitting” and “moving muscles even while sitting to improve blood flow.”

Koyama said those who telework could derive health benefits once they realize they tend to remain seated for long periods and do something about it.

“People, for example, should ensure their PCs issue an alert every 20 minutes to remind them to stand up, do stretching exercises and walk indoors for a while so that the total time spent seated is reduced,” Koyama said.

In this regard, he said standing-style desks can help.

Among other recommendations, Koyama urged teleworkers to move their legs as often as possible while seated. Aside from flexing the limbs, he suggested that teleworkers use studded health goods such as foot point massage or roller device, and even green bamboo slices, to stimulate the nerves in the soles of the feet.

Balance balls can also help, he said. One option is to replace a chair with a balance ball, which helps to stabilize body movement.