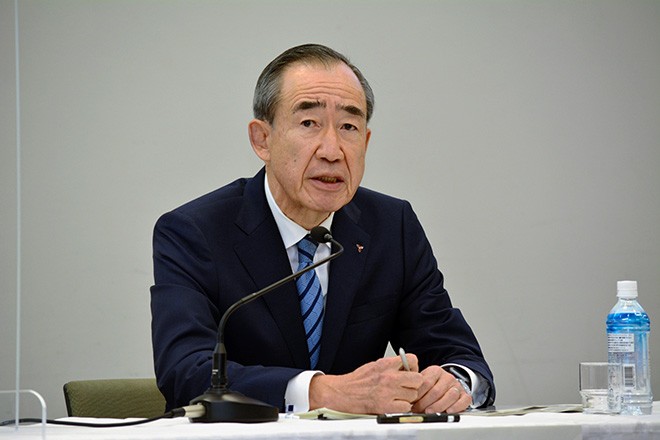 Masaki Sakuyama announces he is resigning as chairman of Mitsubishi Electric Corp. at an Oct. 1 news conference. (Koichi Murakami)

Mitsubishi Electric Corp.’s chairman resigned Oct. 1 following the company's release of a report about an organized effort to cover up suspect inspection and quality control measures over a period of years.

The report was compiled by an investigative committee that found irregularities at two plants.

Masaki Sakuyama announced his resignation with immediate effect. He also resigned the same day as a vice chairman of Keidanren (Japan Business Federation), the nation's most powerful business lobby.

Other heads may yet roll. Many of those in senior positions failed to act when informed about irregularities by those in charge at the plant floor.

In July, Takeshi Sugiyama resigned as Mitsubishi Electric president to take responsibility in a scandal about test data falsification. He was replaced by Kei Uruma.

The company revealed last May that resin materials used at a Gifu plant had not received safety approval for use in electric control equipment.

Reports surfaced the following month that the company’s Nagasaki plant faked inspection tests of air conditioning equipment for trains over a period of about 30 years.

A committee of outside lawyers looked into the irregularities and found that products using the unapproved materials at the Gifu plant had been shipped out from 1994. In 2012, company headquarters approved use of the materials that lacked international safety certification.

In light of past suspicions of irregularities, an inspection of quality control across the entire company was conducted in fiscal 2017.

The head of the plant in Gifu knew about the use of the unapproved materials but asked a colleague not to report the matter to headquarters, saying, “We will cause problems for our customers and sales will also drop if we are unable to ship out products for a prolonged period.”

The coverup continued under a long line of plant chiefs.

It also emerged that a section chief at the Nagasaki plant in charge of quality control noticed discrepancies had cropped up between specifications and test results. In fiscal 2018, when another company-wide inspection was conducted, a report was submitted about falsified data being used in place of the test results to the Public Utility Systems Group at Tokyo headquarters.

But the Tokyo group left matters up to the Nagasaki plant and concluded no irregularity occurred even though it did not confirm whether the appropriate changes had been made at the plant.

The head of that Tokyo group at the time was Uruma, the current company president.

At the Oct. 1 news conference, Uruma acknowledged the irregularity was poorly handled under his watch.

Disciplinary measures for other executives will be decided by December.

The investigative report noted that a wide gap existed between plants around Japan and those working at Tokyo headquarters. There was little personnel movement among the different plants, leading to a closed environment where it was easier to cover up problems over many years.

The investigative committee will have its hands full over the next few months as it combs through 2,300 or so reports from company employees pointing out various problems at the plant floor.

(This article was compiled from reports by Koichi Murakami, Hisashi Naito, Osamu Uchiyama and Yasuro Suzuki.)