Some in LDP fear past scandals will haunt Kishida regime 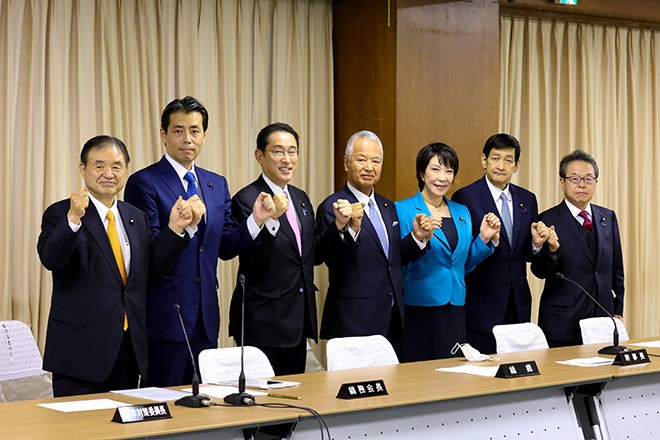 Personnel choices made by Fumio Kishida, the newly elected head of the Liberal Democratic Party, left even ruling party lawmakers scratching their heads after promises of a complete revamp to give it a fresh image to voters.

Kishida will be voted in as prime minister in the extraordinary Diet session to convene on Oct. 4.

On Oct. 1, Kishida announced his lineup of LDP executives that included Akira Amari in the powerful post of secretary-general, the party's No. 2 spot.

At the subsequent news conference for the LDP executives, Amari was peppered with questions about a past scandal in 2016 when he served as state minister in charge of economic revitalization. At that time, suspicions were raised about money he and his aides received from a company engaged in compensation negotiations with the Urban Renaissance Agency. While Amari resigned from his ministerial post, prosecutors were unable to dig up evidence to warrant an indictment against either him or his aides.

During the Oct. 1 news conference, Amari said he was never told by his aides that they had been in contact with the agency.

Yuko Obuchi, who was named to head the LDP’s Party Organization and Campaign Headquarters, has also been embroiled in scandal, having falsified political fund reports in 2014 when she was economy minister, which prompted her resignation after questions were raised.

A younger LDP lawmaker said Kishida’s personnel choices would only play into the hands of the opposition parties as they prepare for a crucial Lower House election that must be held this autumn. They fear the focus being placed on money scandals among LDP politicians will put the party at a major disadvantage.

One such scandal forced Katsuyuki Kawai, a former justice minister, and his wife, Anri, to resign from their respective Lower and Upper House seats earlier this year in a vote-buying case.

A veteran LDP lawmaker speculated that Kishida may not last long in power since his personnel choices give the opposition camp so many ways to stop Diet deliberations.

The opposition is already demanding that Amari appear before the Diet to clear up the past scandal.

“With such choices, Abe should have been made prime minister again,” Azumi said. “This will be nothing but an Abe Cabinet that has Kishida as the main face.”

Tomoko Tamura, the policy chief of the Japanese Communist Party, pointed out that five years ago Amari boldly stated he would face the music concerning the money scandal once he had a handle on the situation.

But Tamura accused Amari of not keeping his promise to respond to Diet questioning, noting that he stopped coming to the Diet immediately afterward, citing a sleep disorder.

The opposition parties are gleefully painting the Kishida administration as nothing but a continuation of the path set by Abe and his successor, outgoing Prime Minister Yoshihide Suga.

Their strategy now is to go after Kishida in reference to past scandals under Abe such as the dubious sale of state-owned land to the Moritomo Gakuen educational institution and questionable funding of a dinner reception in connection with a cherry blossom viewing event hosted annually by the prime minister.