Mah-jongg now an ‘intellectual’ hit at home during pandemic

More people, including children, are playing mah-jongg during the novel coronavirus pandemic. Sales of automatic dealing tables for the classic tiled-based game have also increased. (Video by Jin Nishioka) 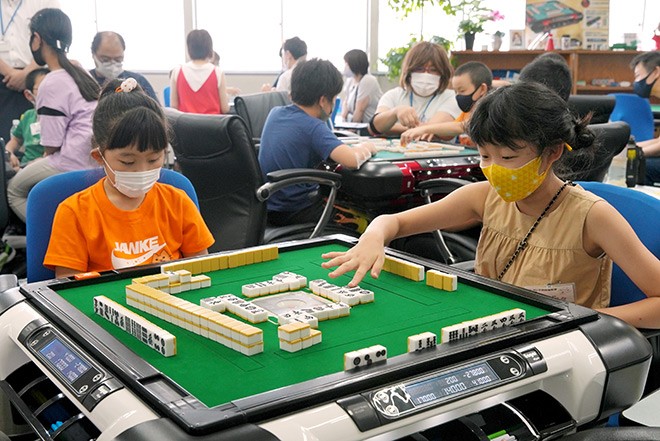 Under the guidance of instructors and with anti-virus measures in place, children play mah-jongg​ at the Neuron Mahjong School’s Osaka branch in July. (Jin Nishioka)

Stay-at-home lifestyles have further eroded the rough image of mah-jongg as a game played all night by crude characters in smoke-filled gambling dens.

Families and friends of all ages are now embracing the classic tile-based game as an intellectual activity during the novel coronavirus pandemic.

At the Osaka home of Hayato Shimoda, 48, the winners of mah-jongg games get their favorite ice cream first or the losers do the dishes.

The corporate worker, who has played mah-jongg​ since he was in college, now plays it at home with his wife and 12-year-old daughter on weekends.

In October last year, he bought an automatic dealing table for about 150,000 yen ($1,350), much to the amazement of his wife who saw it as another example of his splurging on something nonessential.

“For those whose hobby is playing mah-jongg​, an automatic dealing table is the biggest luxury​,” Shimoda said. “It also serves as a communication tool because my daughter also really enjoys it, saying things like, ‘I won on a tile discarded by Daddy!’”

Shimoda isn’t the only one forking out a lot of yen on mah-jongg.

Yuta Watanabe, 25, another Osaka corporate employee, bought an automatic dealing table after the first state of emergency was declared in April last year.

“It’s a great toy for me to play with when I can’t enjoy going out,” he said. “It was rather expensive, but I’m glad I bought it.”

Taiyo-Giken Co., based in Gobo, Wakayama Prefecture, which manufactures and sells mah-jongg​ items, said its home-use automatic dealing tables have been selling well since the first state of emergency.

It sold about 20 percent more units year on year in the business year ending in March.

In December, the company sold about 200 tables, more than twice the figure from a year earlier.

“Home-use models have become available at more affordable prices because they don’t have as many features as industry models,” a Taiyo-Giken Co. representative said. “They’re also selling well maybe because more people who can’t go out have started playing mah-jongg​ as an at-home game.”

The company released the app in 2013, but the number of users and amount of playing time have increased during the pandemic.

More first-time players, ranging from children to those in their 50s, have signed up for mah-jongg lessons in the past few years, according to Neuron, which hosts mah-jongg​ classes in 141 locations across Japan.

Many people seem to have first dabbled in mah-jongg​ on apps during the pandemic.

About 30 percent of new members registered at Neuron’s Oimachi branch in Tokyo since April said they had previously tried mah-jongg apps.

Despite the fears of catching COVID-19, some mah-jongg​ classes are filled to capacity, said Neuron’s head director, Yuichi Ikeya, 48.

He said the trend to view the game as a “mental sport” and a “healthy hobby” has been fueled by the spread of stay-at-home lifestyles during the pandemic.

The game’s public image has been improving in recent years thanks to a popular anime show featuring female high school students who are members of a mah-jongg​ club.

In addition, a professional mah-jongg league, called the M.League, was established in 2018.

“In mah-jongg​, you need to adjust your strategy depending on the situation, like watching the tiles discarded by your opponents to decide which tiles you want to discard,” Ikeya said.

“Patience is also required to make concessions in many ways to determine the balance between offense and defense, instead of aiming to become the first-place winner in each round.”

Ikeya said mah-jongg provides an opportunity for young people to develop abilities that will be important when they reach adulthood.

“I think it may continue to grow in popularity as an intellectual game,” he said.