Governors push for ‘5th wave’ explanation and ‘Go To’ restart 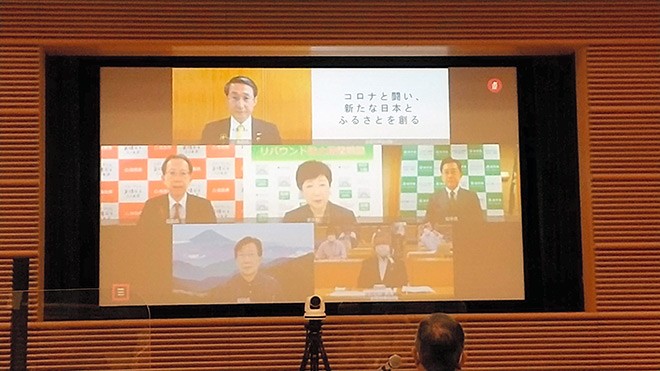 A scene from the Oct. 2 online meeting of the National Governors’ Association (Harufumi Mori)

Prefectural governors from across the nation met online Oct. 2 to urge the central government to swiftly analyze the causes of the most recent “fifth wave” of devastating COVID-19 cases and call for a resumption of “Go To” campaigns to kickstart the pandemic-battered economy.

Forty-two governors who attended the National Governors’ Association meeting, held to mark the end of the latest state of emergency, predicted the next “sixth wave” of infections “will inevitably come.”

They called on the central government to ascertain the causes of the sudden increase and decrease in the number of patients during the fifth wave of the pandemic, the worst yet for Japan.

The governors, citing fears of a potential sixth wave, said the best way to prepare for such an eventuality was to analyze the reasons for the fifth wave and review the effectiveness of anti-virus measures while expanding the health care system.

The association said it intends to form a team in the coming week to start collecting information.

Tokushima Governor Kamon Iizumi noted during the meeting that concerns had been raised inside and outside the central government about the reasons for the sudden decline in fifth wave infections.

Wakayama Governor Yoshinobu Nisaka weighed in saying, “Local authorities and the central government constantly caused people inconvenience by sticking with the ‘put the breaks on the flow of people (slogan).’”

“We should all engage in self-reflection,” he added in calling for a strengthened health care system as an urgent administrative responsibility.

In a series of draft recommendations, governors pointed out that regional economies faced a critical situation as a result of the state of emergency and other measures that have been in place for the past six months.

Niigata Governor Hideyo Hanazumi issued a plea for the central government to accelerate plans to revive its Go To Travel campaign as soon as it gains a proper perspective on the COVID-19 crisis.

Fukuoka Governor Seitaro Hattori implored Tokyo to extend its Go To Eat campaign that is scheduled to expire by the end of December.

Tottori Governor Shinji Hirai expressed hope that Fumio Kishida will draft pandemic related policies worth several tens of trillions of yen after he is sworn in as prime minister this week.

In their draft recommendations, the governors called on the central government to commit an addition 2 trillion yen ($18 billion) in emergency subsidies to rebuild local economies.

Multiple governors expressed keen interest in Kishida’s idea of establishing an agency to handle health crisis management, saying they hoped it would be integrated into local and central services.