Nightlife districts come to life again after lifting of curbs 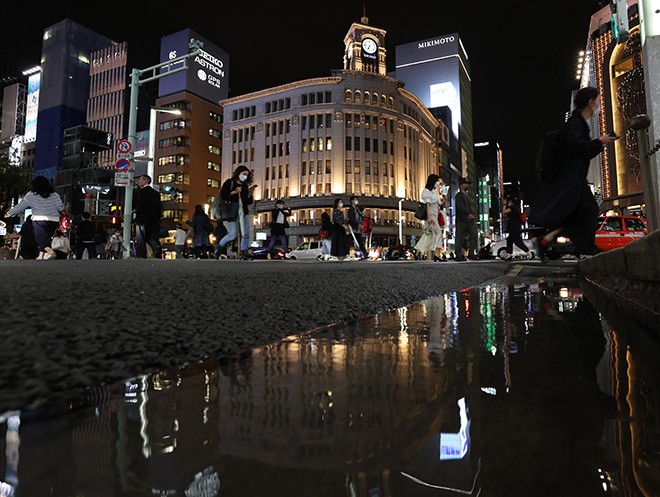 Nightlife entertainment districts are bustling again following the lifting of emergency measures to contain the COVID-19 pandemic that drove many bars and restaurants to the wall.

Pedestrian traffic noticeably shot up on the evening of Oct. 1 in most districts as people weary of months-long restrictions went out to celebrate by eating and drinking as they did before the health crisis hit.

Foot traffic in the Nakasu district of Fukuoka in southern Japan increased by 37 percent compared with the figure a week ago, according to an estimate by NTT Docomo Inc. based on location data collected from mobile phones at 7 p.m. on Oct. 1.

In the Sannomiya district of the western port city of Kobe, the increase came to 35 percent and 26 percent in the Susukino district of Sapporo in Hokkaido, the northernmost main island.

A more than 10 percent increase was recorded around the Kokubuncho district in Sendai as well as Sakae in Nagoya, Umeda in Osaka and Shijokawaramachi in Kyoto.

The capital’s Shibuya and Ikebukuro districts also saw drops in pedestrian traffic of between 8 and 10 percent.

The ritzy Ginza shopping district seemed to be doing a roaring business with numbers up by 11 percent.

Crowds in major nightlife districts around Tokyo started to sharply drop between 7 p.m. and 7:59 p.m., the estimates show. Observations were taken from 5 p.m. until midnight.

In Tokyo, Oct. 1 offered the first opportunity in two and a half months for many eateries to serve alcoholic drinks until 8 p.m.

That likely factored in the nighttime turnout.

Pedestrian traffic in Tokyo around noon on Oct. 2, the first holiday since the state of emergency was lifted, also increased from a week ago.

In Ueno, the figure rose by 12 percent, and in Asakusa by 10 percent.

The Shibuya, Shinjuku, Ginza and Ikebukuro districts each saw increases of between 4 and 6 percent.

Urban areas in the Kansai region appeared to have had a bigger turnouts compared with a week ago in the area near Abeno Harukas in Osaka and the Arashiyama district in Kyoto.

(This article was written by Kenichiro Shino and Keisuke Yamazaki.)