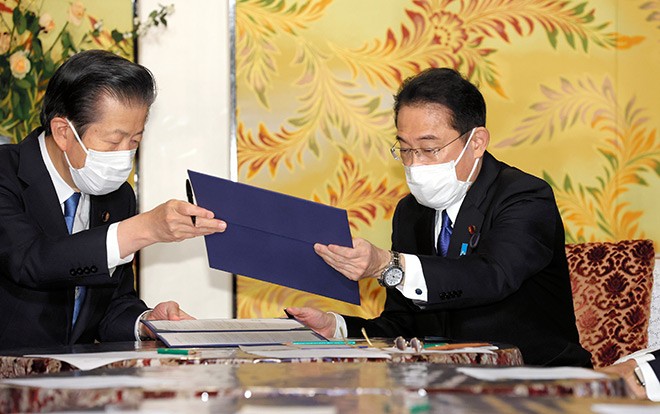 Now that the ruling Liberal Democratic Party's leadership race is out of the way, campaigning for a crucial Lower House election will likely kick off Oct. 26 with voting set for Nov. 7, sources said.

Fumio Kishida, the newly elected LDP president to head the ruling coalition and prime minister in waiting, on Oct. 2 discussed the election schedule and other issues with Hirokazu Matsuno, his pick to serve as chief Cabinet secretary in his administration.

An extraordinary Diet session will be convened Oct. 4 and Kishida is expected to dissolve the Diet on its last day, Oct. 14.

Under the Public Offices Election Law, voting and ballot counting must be conducted within 40 days from the day the Diet is dissolved.

Kishida is keen to get a supplementary budget worth several tens of trillion yen approved. To make that happen quickly, Kishida wants to hold the Lower House election early.

With the Nov. 7 voting schedule, Kishida reckons he can quickly get to work on compiling the overall budget, sources said.

But he is also entertaining another option, opening campaigning for the election on Nov. 2 with voting and ballot counting on Nov. 14, sources said.

The alternative schedule would make it easier for Kishida to attend to the Group of 20 Rome Summit scheduled to be held Oct. 30-31, thereby eliminating the need to make an official and unusual trip overseas in the middle of an election.

Kishida in the meantime is putting the finishing touches on his Cabinet picks ahead of an official announcement scheduled for Oct. 4.

Daishiro Yamagiwa, 53, who belongs to the party faction led by longtime Finance Minister Taro Aso, has received an informal offer to be part of Kishida’s administration.

It would mark the first Cabinet post for the former vice economy minister.

Kishida has also considered bringing Seiko Noda, 61, into the Cabinet and retaining Nobuo Kishi, 62, as defense minister, according to sources.

In an unexpected move, Tetsuo Saito, 69, the vice head of junior coalition partner Komeito, got the nod for the land ministry portfolio in the new administration. It is unusual for a Komeito lawmaker to be tapped more than once for a Cabinet post.

Kishida on Oct. 2 told reporters that he would finalize his personnel decisions by the end of Oct. 3.