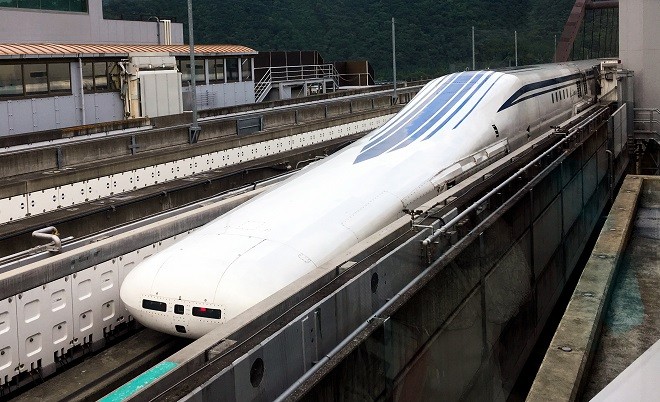 The much-ballyhooed magnetic levitation train line project linking Tokyo with Nagoya has been stuck in limbo since Shizuoka Prefecture refused to allow construction for what could be one of the world’s fastest trains.

Central Japan Railway Co. (JR Tokai) initially planned to have the Chuo Shinkansen Line in operation between the capital’s Shinagawa Station and Nagoya Station in 2027, with a later connection to Osaka.

The maglev line will go through Shizuoka Prefecture, but the prefectural government has raised concerns that construction work could change the volume of water available along the Oigawa river, which runs through the prefecture and is part and parcel of residents’ livelihoods.

JR Tokai is trying to win over municipal governments in the prefecture, but those talks are in the very early stages.

The planned maglev line will have no train stop in Shizuoka Prefecture, so residents expect no direct benefits from the project.

Although there is no indication of how long the prospective opening date will be put off, the total project cost estimate has grown to 10.5 trillion yen ($95 billion).

Dialogue between JR Tokai and the prefectural government has made little headway.

The Nagoya-based railway company started work on the Shinagawa-Nagoya section in 2014 following the central government’s approval of the plan.

But Shizuoka Governor Heita Kawakatsu made clear in 2017 that he would not give permission for the company to break ground in his prefecture, citing possible environmental damage.

Shin Kaneko, president of JR Tokai, said in 2019 that delays in the work in Shizuoka Prefecture could push back the starting date of services on the maglev line.

Kaneko held talks with Kawakatsu in 2020, but the prefectural government still refused to approve the construction work. That refusal made certain the opening date for the line would be delayed.

The debate between the two sides has become heated at times.

“The company is using its own logic to provide its own explanations, which are totally incomprehensible to residents of our prefecture,” Nanba said.

For about 18 months, the expert panel has been discussing how much the construction work would reduce water levels along the Oigawa river.

The panel’s draft interim report says water levels will remain unchanged, under certain conditions, in the middle and lower reaches of the river. That opinion falls in line with JR Tokai’s arguments.

Nanba said the prefecture has no intention to completely deny that opinion, but it had to question the reliability of the data used in the study.

The prefectural government also argues there are lingering concerns about the work’s impact on ecosystems.

The expert panel plans to complete an interim report during its next meeting.

“I will instruct JR Tokai to give plain and careful explanations to stakeholders in the local communities based on the interim report,” then transport minister Kazuyoshi Akaba told a news conference on Sept. 28.

No prospect, however, is in sight for when a final report will be worked out. The panel’s expected next step is to enter discussions on the impact on ecosystems.

JR Tokai has been making overtures to the governments of 10 municipalities located in the Oigawa river basin.

Kaneko held his first talks with mayors of those areas on Sept. 18 in the prefectural capital of Shizuoka.

The talks, however, were only a “first step in dialogue” and involved no in-depth discussions, officials said.

After the talks, Kaneko emphasized his company would only go ahead with construction work after obtaining the understanding of residents of the river basin.

He declined to give a time frame for when the maglev line would enter service.

More than a year has passed since the delay became certain.

In April, it was learned that the construction cost projection for the Shinagawa-Nagoya section had grown by 1.5 trillion yen because of anti-quake measures and other factors.

The estimate for the entire project, including the eventual extension to Shin-Osaka Station, has grown from 9 trillion yen to more than 10 trillion yen.

JR Tokai was initially expected to pay the costs on its own.

The administration of Prime Minister Shinzo Abe, however, extended 3 trillion yen in low-interest loans for the project to move up the prospective opening date of the entire line from 2045 to 2037.

The injection of taxpayers’ money has made it difficult for JR Tokai to press ahead with the plan based on its managerial business decision alone.

The delay in the opening has started to affect urban development projects in service areas.

Nagoya Railroad Co., for example, has put off plans to erect a high-rise building outside Nagoya Station by 2027.

The decision to delay the building plan also took account of the impact of the COVID-19 pandemic.