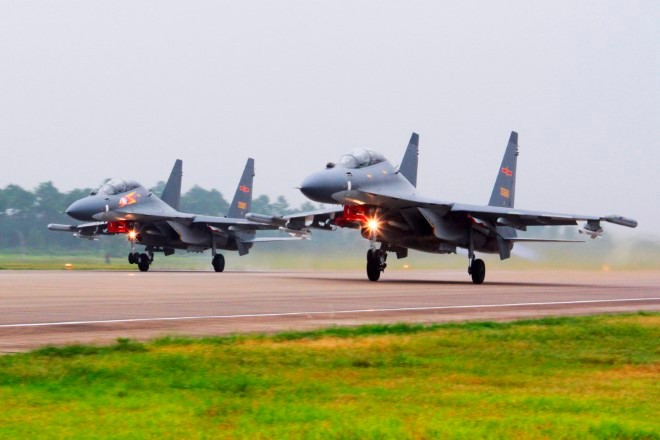 In this undated file photo released by China’s Xinhua News Agency, two Chinese SU-30 fighter jets take off from an unspecified location to fly a patrol over the South China Sea. (Xinhua via AP)

TAIPEI--The United States urged China on Sunday to stop its “provocative” military activities near Taiwan, after the island scrambled jets to warn away close to 100 Chinese military aircraft entering its air defense zone over a three-day period.

Taiwan, a democratically governed island that is claimed by China, has complained for more than a year of repeated missions near it by China’s air force, often in the southwestern part of its air defense zone close to the Taiwan-controlled Pratas Islands.

On Friday, Saturday and again on Sunday, Taiwan’s defense ministry reported that China’s air force had sent aircraft into the zone, with 39 on Saturday alone, the highest reported number to date.

“The United States is very concerned by the People’s Republic of China’s provocative military activity near Taiwan, which is destabilizing, risks miscalculations, and undermines regional peace and stability,” State Department spokesperson Ned Price said in a statement.

“We urge Beijing to cease its military, diplomatic, and economic pressure and coercion against Taiwan.”

The United States has an abiding interest in peace and stability across the Taiwan Strait, and will continue to assist Taiwan in maintaining a “sufficient self-defense capability,” Price added.

“The U.S. commitment to Taiwan is rock solid and contributes to the maintenance of peace and stability across the Taiwan Strait and within the region.”

Taiwan’s Foreign Ministry thanked the United States for its concern, and said China was increasing tension in the Indo-Pacific region.

“In the face of China’s challenges, our country’s government has always committed itself to improving our self-defense capabilities and resolutely safeguarding Taiwan’s democracy, freedom, peace and prosperity,” it said.

China has yet to comment on its activities, and it is not clear what may have caused Beijing to decide to mount the missions, though Friday was the country’s National Day, a patriotic holiday that marks the founding of the People’s Republic.

It has previously said such flights were to protect the country’s sovereignty and aimed against “collusion” between Taiwan and the United States, the island’s most important international backer.

Taiwan’s defense ministry said it sent combat aircraft to warn away the Chinese aircraft, while missile systems were deployed to monitor them.

It said the aircraft were a mixture of J-16 and Su-30 fighters as well as anti-submarine and early warning aircraft. Friday’s flights included nuclear-capable H-6 bombers.

Taiwan Premier Su Tseng-chang condemned China for its actions on Saturday, saying the country was engaging in military aggression and damaging regional peace.

Taiwan marks its national day next Sunday, with a major speech by President Tsai Ing-wen and military parade in central Taipei, which will include a fly-by of fighter jets.

China has stepped up military and political pressure to try to force Taiwan to accept Chinese sovereignty.

Taiwan says it is an independent country and will defend its freedom and democracy.