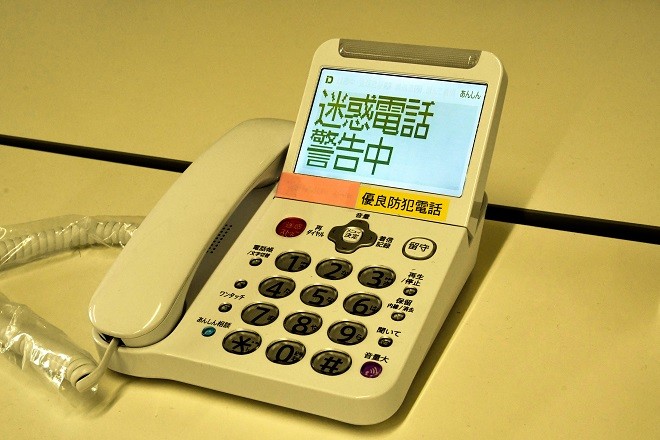 A special anti-crime telephone issues a warning message against a potentially risky call on Aug. 6 at the Aichi prefectural police’s Meito Station before the phone even rings. (Ayami Ko)

The Metropolitan Police Department is warning the public that fraudsters are impersonating police and confiscating banknotes from citizens on false claims that the money is counterfeit.

Police said people should never cave in to demands for money from self-proclaimed police officers.

The number of such swindles has rapidly increased this year, police said.

The scam typically goes like this: Phony officers will pop up at residences claiming they are there to “recover counterfeit bills.” Usually, the residents will receive a “prep” call from the scammers just before they show up at the door.

“Push the emergency number 110 as soon as you get a call like that,” a Tokyo police official said. “Police officers will never visit your home to take cash away.”

According to Tokyo police, a man describing himself as “an official from the MPD” called a man in his 50s living in the capital’s Koto Ward in mid-February.

The culprit told the target that police have “caught a burglar who had broken in your home, among other houses, to replace money with imitation bills.”

He then told the victim to “give your money to a policeman who will soon show up at your home so that we can confirm whether the banknotes are counterfeit.”

A man impersonating a police officer showed up at the resident’s home shortly after the call. He was not in a police uniform.

Police said similar cases have been cropping up in Tokyo since 2019. MPD data shows five instances were reported in 2019, but the number shot up to 26 in 2020.

This year, about 200 million yen was stolen from residents in as many as 54 fraud cases by August.

Authorities are also warning citizens not to give their ATM cards to self-described police officers or bank officials.

Not keeping large amounts of cash at home is another way to avoid becoming a target of con artists.

Authorities also recommend people quickly hang up on scam calls and reach out to family members and police if strangers suddenly start talking about your money over the phone.

When callers explain that they are from public organizations, you should put the phone down and call the official numbers to confirm it was actually the government on the other end, officials recommended.