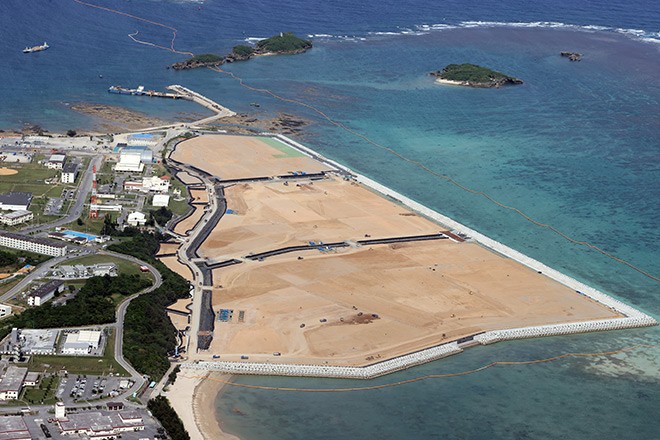 Local assemblies from across Japan are pressing the central government to refrain from using dirt from southern Okinawa Prefecture as landfill for a new U.S. military base on grounds it may contain human remains from the Battle of Okinawa in 1945.

More than 60 entities adopted a statement of opinion on the matter.

The central government triggered a fierce outcry among islanders and people elsewhere after it said using dirt from the southern part of the prefecture was a possible option in continuing reclamation work off the Henoko district of Nago in northern Okinawa Prefecture to construct a replacement facility for U.S. Marine Corps Air Station Futenma, also in the prefecture.

The central government’s plan was revealed in a document that it submitted to prefectural authorities in April 2020 seeking approval for a change in the design of the landfill project.

Significantly more amounts of soil than previously estimated were needed after an expanse of soft seabed was discovered in the landfill site. The central government decided to procure more dirt from the prefecture, expanding candidate sites to southern areas.

The Futenma base is regarded as the most dangerous in Japan because it is situated in the middle of a residential area of Ginowan city. The replacement facility is aimed at appeasing residents' safety fears.

More than 200,000 Japanese and Americans died in the 1945 ground battle that raged for about three months. The death toll included 94,000 Okinawan civilians.

The southern part of the prefecture saw the brunt of fighting as the Imperial Japanese Army stationed there was forced to retreat with local civilians toward the island’s southern edge in the face of advancing U.S. troops.

Even after 76 years, volunteers are still hard at work there trying to recover human remains.

The Nara prefectural assembly was among local assemblies that adopted the statement of opinion, having done so in July.

“Using the remains for reclamation work to construct a new base amounts to violating the victims’ dignity and killing the ‘silent’ war dead for the second time,” it stated.

Joined by others, Seiki Sakihama, who heads a group in solidarity with Okinawa Prefecture, lobbied the Nara prefectural assembly in May to issue the statement.

Sakihama, who is 74 and originally from Okinawa Prefecture, said using dirt that may contain war dead remains is out of the question even if people are in favor of the U.S. military project.

After receiving the petition, Shoshi Kawaguchi, who is 87 and the oldest member of the assembly, worked to persuade each faction to support the endeavor.

Members of the ruling Liberal Democratic Party and other assembly groups initially voiced a reluctance to get involved in the matter concerning Okinawa.

But Kawaguchi patiently talked them into adopting the statement, asking them how they would feel if soil for the landfill contained the remains of their own relatives.

Victims of the Battle of Okinawa include 77,458 people from all parts of the main islands of Japan, including troops sent to the island.

In the case of Nara Prefecture, 591 people lost their lives in the fighting in the southernmost prefecture.

“There is no prefecture in Japan that had not seen its people killed in the Battle of Okinawa,” Kawaguchi said. “(Using soil that may be mixed with war dead remains) raises the question about how we Japanese face the war dead.”

In Okinawa Prefecture, the Naha municipal assembly was the first to issue the statement in March.

It was followed by the Yaese town assembly, which was mentioned by the central government as a potential site where dirt will be dug up for the reclamation work, and the Nago city and prefectural assemblies. In total, 11 statements were issued so far in the prefecture.

Similar moves have since spread to other prefectures.

Fifty-two statements by local assemblies were adopted outside the prefecture against the use of dirt from southern Okinawa by the end of September, according to the Upper House of the Diet.

Another example of joining forces with Okinawan assemblies is the Nagano city assembly, which issued a unanimous statement of opinion in June.

Yukio Nunome, a 64-year-old assemblyman, talked conservative assembly members into endorsing it, saying the issue is separate from the one involving the U.S. base relocation.

Before and during the war, Nagano Prefecture sent 33,000 local people to migrate to what was then Manchuria in northeastern China, more than any other Japanese prefecture. Many of them perished there.

“It is only natural for people to wish that the remains of the war dead all be returned to their hometowns,” Nunome said.

Some local assemblies that issued a statement of opinion called on the central government to spearhead efforts to recover the remains of all the war dead.

The central government is responsible for the recovery of the remains of troops and civilians killed in World War II under a law that took effect in 2016.

Defense Minister Nobuo Kishi has repeatedly described the issue of recovering the remains of war victims as “extremely important.”

“We will make sure in our contract with dealers that workers will proceed with caution in dealing with the remains even if the decision is made to use dirt from southern Okinawa in the reclamation work,” he said in a Diet session in February.