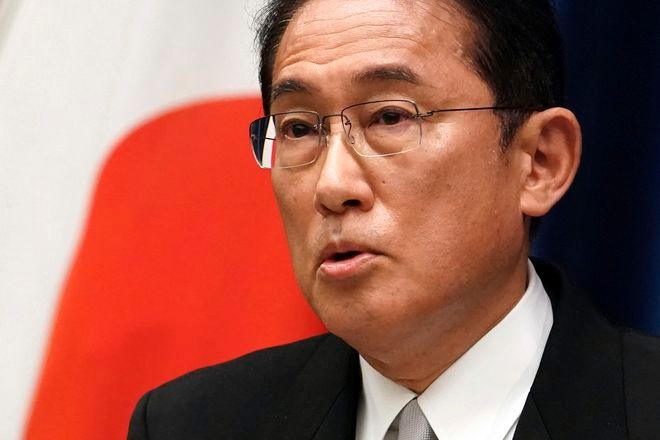 Fumio Kishida, Japan's prime minister, speaks during a news conference at the prime minister's office in Tokyo on Oct. 4. (Pool Photo via AP)

Japan's new Prime Minister Fumio Kishida held his first talks since taking office with President Joe Biden and confirmed they will work to strengthen their alliance and cooperate in regional security in the face of growing challenges from China and North Korea.

Kishida, who was elected by parliament and sworn in Monday, told reporters that Biden reassured him of the U.S. commitment to defend the Japanese-controlled East China Sea island of Senkaku, which China also claims and has escalated its coast guard activity in the area.

Biden provided “a strong statement about U.S. commitment for the defense of Japan, including ... Senkaku,” Kishida said, adding that the two leaders also reaffirmed they would tackle together the “challenges facing neighboring regions such as China and North Korea.”

Kishida supports stronger Japan-U.S. security ties and partnerships with other democracies in Asia and Europe, including the U.K., in part to counter China and nuclear-armed North Korea. Kishida has also pledged to beef up Japan’s missile and naval defense capabilities.

Kishida on Monday acknowledged the need to continue dialogue with China, an important neighbor and trade partner, but said that “we must speak up” against China’s attempt to change the status quo in the East and South China Seas.

The two leaders confirmed their commitment to work together toward the (asterisk)free and open Indo-Pacific," a vision of partnerships among the regional democracies as a counterbalance to China's increasingly assertive actions, Kishida said.

Holding his first talks as prime minister with the U.S. president serves “a first step toward elevating the Japan-U.S. alliance to even higher levels," Kishida said.

The 20-minute phone conversation Monday, proposed by Japan, started with Biden congratulating Kishida. The leaders agreed to call each other by their first names, and agreed to meet at an early date.

Later Monday, Kishida held online talks with Australian Prime Minister Scott Morrison, agreeing to strengthen their security and economic ties bilaterally and as part of the Quad alliance, which also includes the United States and India, to promote the regional peace and stability, Japan's Foreign Ministry said in a statement.

Kishida expressed his support for a newly launched security partnership among Australia, Britain and the United States. He and Morrison reaffirmed their strong objection to what they see as China's policy of coercive economic measures and unilateral attempts to change the status quo in the regional seas, the ministry said.

Outgoing German Chancellor Angela Merkel said in her congratulatory message to Kishida, released Tuesday by her office: “Germany is looking full of confidence toward working with you to further deepen the friendship between our people and stand up together for free trade, multilateralism, rules-based order and peaceful conflict solution.”

While Kishida had a upbeat diplomatic debut, media surveys conducted over the last 24 hours showed support ratings for his new Cabinet were about 15 points lower than the initial high support his unpopular predecessor Yoshihide Suga enjoyed last year.

In the Mainichi newspaper telephone survey published Tuesday, 49% of 1,035 respondents supported the Kishida Cabinet, compared to 64% Suga initially enjoyed, and 40% disapproved of Kishida. The Nikkei newspaper phone survey showed 59% of 854 respondents supporting Kishida's Cabinet, also 15 points below Suga's. Many of those who disapproved of Kishida cited customary power broking by party heavyweights behind his victory.

Kishida, 64, had been known as a moderate in the ruling Liberal Democratic Party but won the party's leadership last week after a hawkish turn on security and taking a more conservative stance on gender equality and other issues.

He succeeds Suga, who resigned after only one year in office after seeing his support plunging over his handling of the virus and insistence on holding the Olympics--seen as high-handed and ignoring the public's concerns.