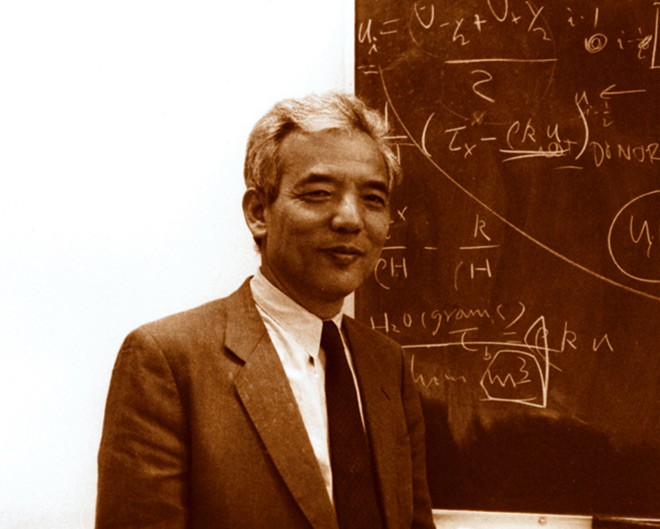 Syukuro Manabe, co-recipient of the 2021 Nobel Prize in Physics, in his younger years (Provided by Princeton University)

Legend has it the village of Shinritsu in Ehime Prefecture was settled by fleeing warriors from the Heike clan after its defeat by the rival Genji clan in the late 12th century.

Known for producing Japanese “washi” paper, tea and tobacco leaves, the village was renamed Shingu and later incorporated in the city of Shikokuchuo during the municipal mergers of the Heisei Era (1989-2019).

The area, with a population of 900, is now known as the city’s Shingucho district.

Syukuro Manabe, who has been named a co-recipient of this year’s Nobel Prize in Physics, was born there in 1931.

When Manabe was a student at a local middle school under the prewar and wartime school system, a teacher gave his class an intensive course in English, which was referred to as “the language of enemy countries.”

U.S. B-24 bombers flew overhead constantly, but Manabe remained focused on his studies, believing the Americans would never bomb a tiny mountain community.

Both his father and grandfather ran the village’s only clinic. But Manabe decided to study geophysics. He reasoned that he was not suited for the medical profession because of his tendency to lose his cool in an emergency.

After earning his doctorate from the University of Tokyo, Manabe went to the United States in 1958.

The country was reeling from the Sputnik crisis, having been beaten by the Soviet Union in the race to launch the world’s first artificial satellite the previous year. The sense of fear and anxiety made America eager to recruit promising talent from around the world.

Manabe went on to succeed at modeling global warming.

He is affectionately called Suki by his colleagues. His given name, Syukuro, is difficult for Americans to pronounce.

Personally, Manabe is convinced that English should be the language of researchers who work on the global stage.

For this reason, he held all his discussions in English, even with his Japanese colleagues, when he temporarily relocated his base of research to Japan in his 60s.

His speeches are peppered with the names of places from around the world, such as the Gobi Desert, the Ob River and the Tibetan Plateau.

Connecting the oceans, the atmosphere and the continents, he has deepened his research on a grand scale, drawing not only on physics but also biology and chemistry.

A boy who studied in a mountain village in Shikoku that is no longer on the map has become a Nobel laureate.

In a document released in Sweden, Manabe’s place of birth is listed as “Shingu, Ehime.”