EDITORIAL: Manabe’s Nobel Prize reminds us anew that our survival is at risk 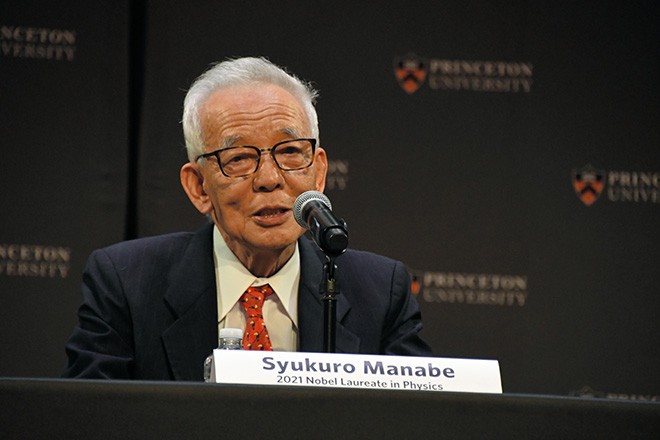 Syukuro Manabe speaks at a news conference in the U.S. state of New Jersey on Oct. 5 after he was named a co-recipient of the 2021 Nobel Prize in Physics. (The Asahi Shimbun)

A prediction made half a century ago about the future of planet Earth has become a reality, forcing the human race to do something about it.

Syukuro Manabe, a Japan-born scientist working at Princeton University, has been named a co-recipient of this year’s Nobel Prize in Physics for his pioneering research. His studies, using a supercomputer, showed that global temperatures rise from increased carbon dioxide levels in the atmosphere.

Calculating the balance between the solar energy that reaches Earth and the energy released from the planet puts Earth’s temperature at minus 18 degrees.

This means our survival on our planet owes to greenhouse gases.

On the other hand, any rapid change in the volume of greenhouse gases, which are slightly present in the atmosphere, induces climate change that endangers human beings and other lives on Earth.

The simulation model factors in not only the temperature, humidity and other physical conditions of the atmosphere but also oceanic conditions, such as seawater temperature and currents.

The Royal Swedish Academy of Sciences cited his contribution to the prediction of climate change as a reason for awarding the Nobel Prize, saying, “His work laid the foundation for the development of current climate models.”

Controversy raged for years on whether global warming was actually real and whether human activities were causing the phenomenon.

In 1989, when research on climate change began attracting attention, Manabe said in an Asahi Shimbun interview, “It will be too late (to curb global warming) if we keep waiting for scientists to produce 100-percent proof.”

Research continued on the impact of human activities on global warming. In 2007, the Nobel Peace Prize was awarded jointly to former U.S. Vice President Al Gore, who had campaigned against global warming, and the U.N. Intergovernmental Panel on Climate Change (IPCC).

The studies by Manabe and other scientists have been used in the IPCC’s predictions. In a report published in August providing scientific proof for global warming, the IPCC declared unequivocally that there is no doubt the phenomenon is human-induced.

The Paris Agreement, an international treaty on climate change, aims to reduce the rise in temperature to well below 2 degrees from levels before the Industrial Revolution and preferably to 1.5 degrees to minimize the impact on island nations and other at-risk regions.

Industrialized nations are striving to curb their greenhouse gas emissions, and Japan last year set its goal of achieving carbon neutrality in 2050 and wrote it into law. There should be no going back, only forward.

The 26th U.N. climate change conference (COP26), delayed by the novel coronavirus pandemic, will kick off at the end of October in Britain.

“Green Recovery,” which will link economic recovery from pandemic damage to efforts to fight climate change and protect the ecosystem, is now drawing attention.

Seeing Manabe’s Nobel Prize in the light of a heightened sense of crisis over climate change that confronts the human race, we need to give concrete shape to policies for achieving targets and review corporate activities and people’s lifestyles.