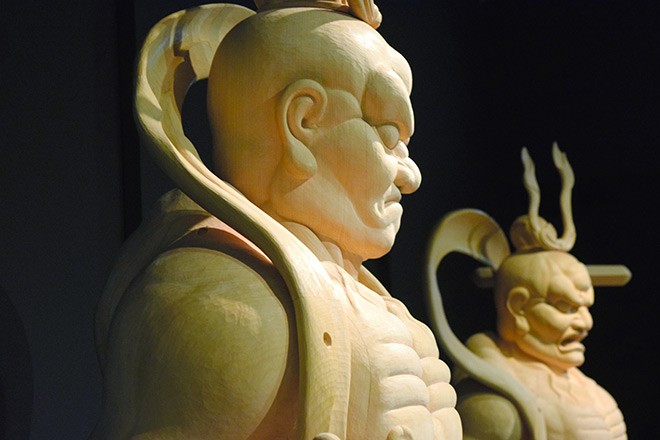 The reproduced “agyo,” right, and “ungyo” statues are shown to reporters at the Okinawa Prefectural Museum and Art Museum in Naha on Sept. 17. (Mika Kuniyoshi)

NAHA—A pair of “Nio” Buddhist deity statues that stood guard at Enkakuji temple here from the 15th century until their destruction in World War II have been restored in a six-year project.

Restoration workers had just 13 fragments of the originals to guide them, including bits of a leg, arms and chest that local residents and others retrieved soon after the war.

The effort was a part of the “Ryukyu Kingdom cultural heritage collection and restoration” project of the Okinawa Prefectural Museum and Art Museum in Naha.

“So many cultural properties were lost during the ground warfare in Okinawa,” said Masayuki Dana, the museum’s director. “Restoring not only artworks but also technologies from when the pieces were made allows the Ryukyu Kingdom’s culture to be passed on to posterity, accumulated and kept alive.”

Workers on the project interviewed about 20 local residents who had seen the statues when they were still intact and conducted scientific analyses on the fragments.

Through those efforts, they rebuilt the fierce-looking 2.5-meter-tall “agyo” statue with its mouth open and its companion, the closed-mouth “ungyo” statue.

The Nio statues are now on display at the Kyushu National Museum in Dazaifu, Fukuoka Prefecture, as part of a traveling exhibition titled “Tewaza: Recreating Ryukyuan Handicraft Culture.”

A plan is also being considered for showing the statues in Tokyo.

The restored duo were scheduled for a public unveiling in Okinawa Prefecture, but that was postponed because the museum remained closed through the end of September due to a spread of novel coronavirus infections.

Erected under the reign of the Ryukyu Kingdom (1429-1879), the statues stood guard on both sides of the gate to Enkakuji temple, which retained the family grave of the kingdom’s royal house but was destroyed during the 1945 Battle of Okinawa.

The temple, which was located on the north of Shuri Castle in Naha, was designated a national treasure by the central government in the prewar period.

Based on radiocarbon dating and other evidence, project workers determined that the statues were initially made of Japanese nutmeg trees from around the 15th century. Japanese nutmeg does not grow naturally in Okinawa Prefecture.

From the realistic rendering of muscles and blood vessels on the fragments of the original statues’ arms and chest, the workers concluded the pieces could be the work of Inpa, a medieval group of Buddhist statue sculptors based in Kyoto.

Not one fragment from the face parts has survived, but the workers studied Nio statues by Inpa at five sites in Japan, including in Ishikawa Prefecture, and conducted additional research to narrow down how their faces looked.

The restoration project, which the museum began in 2015, was completed in March. A sense of urgency was felt because the number of people who had seen the original statues was dwindling.

The museum has worked on restoring 65 pieces of the Ryukyu Kingdom’s cultural heritage in eight domains, including pictorial arts, textiles and metalwork, not as “replicas” but as what it calls “reproductions.” These involve an exhaustive re-creation of everything from the materials to make them to the technologies used at the time.

It sees its work on the Nio statues as a culmination of those efforts.