Syukuro Manabe responds to questions in an interview with The Asahi Shimbun at his New Jersey home on Oct. 5. (Gakushi Fujiwara) 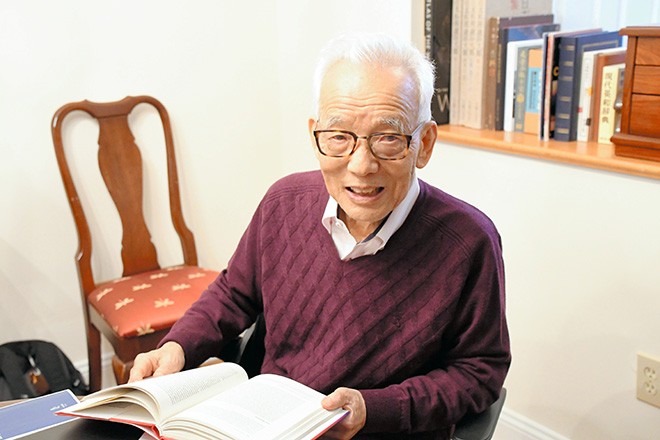 Syukuro Manabe, this year's co-winner of the Nobel Prize in Physics, responds to questions in an interview with The Asahi Shimbun at his New Jersey home on Oct. 5. (Gakushi Fujiwara)

Long before the Cold War thawed and decades before climate change took the spotlight as one of the biggest problems facing humanity, Syukuro Manabe was toiling away at mapping out the evolution of global warming.

In 1967, he published a scientific paper that predicted that the surface temperature of the planet would increase by at least 2 degrees if the concentration of carbon dioxide in the atmosphere doubled.

He was researching this at a time when computers were not as accurate or powerful as they are now. Because of the computational limits he faced, Manabe made his calculations based on a simplified model of the atmosphere that extended like a single column from the ground high up into the air.

He would later revise the model to make it more three-dimensional by including temperature, air pressure and wind direction, laying the foundation for a way that computers could calculate the complex interactions that occur in the Earth’s atmosphere.

For his groundbreaking work in creating a method to forecast climate change through computer modeling, he was jointly awarded this year’s Nobel Prize in Physics.

While this method of calculation was not very accurate at first, other researchers, including Klaus Hasselmann, a co-winner this year, contributed to improving its accuracy.

Seita Emori, deputy director of the Earth System Division at the National Institute for Environmental Studies (NIES), said that Manabe was the first to crunch the numbers to “combine the laws of physics to reproduce the Earth’s climate” in a model.

“That has served as the foundation for all the forecasts now being made about global warming,” he said.

Another expert said Manabe was not only a pioneer in computer climate modeling, but he was also one whose work could change the future of humankind.

“Long before the loud outcry over global warming, he made calculations about climate change by combining the atmosphere with the oceans,” said Masahide Kimoto, the president of NIES. “Humankind is now striving to make a major move toward a carbonless society because of Manabe’s research.

“The spirit of Manabe’s trailblazing has been picked up by others and has allowed Japanese researchers to make major contributions toward the latest report of the Intergovernmental Panel on Climate Change (IPCC).”

Manabe’s research was used in compiling the first IPCC report in 1990. That led to the 1992 agreement on the U.N. Framework Convention on Climate Change. The Kyoto Protocol was subsequently adopted in 1997.

The IPCC was jointly awarded the Nobel Peace Prize in 2007, along with former U.S. Vice President Al Gore.

Manabe was able to create a solid foundation for other climate researchers working on modeling.

Subsequent research carried out across many nations has contributed to the approval of the Kyoto Protocol and the 2015 Paris Agreement on climate change that called on countries to reduce the global temperature increase from before the Industrial Revolution to under 2 degrees by cutting greenhouse gas emissions.