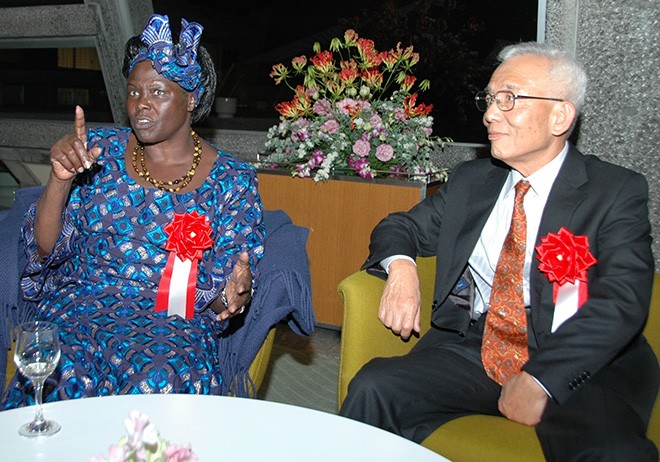 The news that Syukuro Manabe, 90, had jointly won this year’s Nobel Prize in Physics for his research contributions to climate science caught his old childhood friend off guard.

Ooka was Manabe’s classmate at a junior high in a village called Shinritsu, part of today’s Shikokuchuo city, in Ehime Prefecture.

Academically, Manabe was excellent, Ooka recalled. As a child, he “was always studying.”

Ooka remembers Manabe used to say things like, “The weather in Japan tends to be dry when there is no typhoon.”

Masato Sugi, 72, used to work at Meteorological Research Institute in Tsukuba, Ibaraki Prefecture, where he studied the relationship between typhoons and climate change.

Sugi and Manabe authored a paper together about 20 years ago, when Manabe had returned to Japan to teach younger researchers.

“He was someone who absolutely loved to research,” Sugi said. “He was everybody’s idol, popular among his students and fellow researchers.”

Tomio Asai, 89, a professor emeritus at the University of Tokyo who studied with Manabe when they were both graduate students, said the news is “very significant in terms of thinking about global environmental issues.”

Manabe is an “open book, someone with an unacademic-like personality in a positive sense,” Asai said.

In 1992, Manabe became the first recipient of the Blue Planet Prize, an award for researchers who contribute to solving global environmental issues, chosen by the Asahi Glass Foundation.

Asai was on the selection committee at the time.

Asai said he has previously described the award as the equivalent of a Nobel Prize in environmental science.

“But I never expected back then that he would actually win the Nobel Prize,” Asai said with a smile.