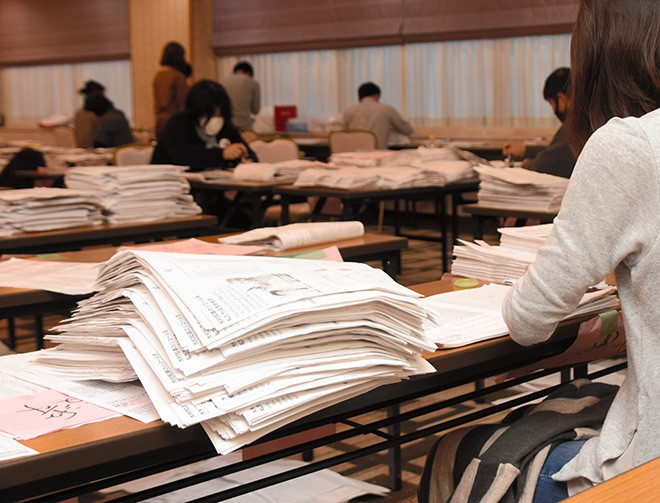 NAGOYA--The former president of an advertising company has admitted to his role in forging thousands of signatures in a failed attempt to remove Aichi Governor Hideaki Omura from office in a recall.

Akira Yamaguchi, 38, pleaded guilty during his first hearing at the Nagoya District Court on Oct. 5. He has been charged with violating the Local Autonomy Law by falsifying signatures.

His admission is in stark contrast to two others who have been indicted in the same case but are being tried separately.

At their first hearing, Takahiro Tanaka, 60, who headed the secretariat in charge of gathering the signatures for the recall, and his second son, Masato, 29, did not enter a plea of guilt or innocence.

According to opening arguments by prosecutors, Yamaguchi became involved in the move against Omura because he felt it would open up business opportunities with Katsuya Takasu, a cosmetic surgeon who headed the recall campaign.

A denier of the Holocaust and the Nanking Massacre, Takasu and others were upset by Omura’s handling of the Aichi Triennale 2019 international art festival, which featured an exhibit on wartime “comfort women.”

In June 2020, Yamaguchi approached the recall movement and offered to distribute fliers for free.

In October, Tanaka asked Yamaguchi to gather people in Kyushu to forge signatures, according to the prosecutors. The goal for the recall was about 860,000 signatures, but with the submission deadline approaching, the campaign had only gained about 6,000.

Tanaka intensified his demands to Yamaguchi, asking for a million signatures. But he also offered to pay Yamaguchi for his services, the prosecutors said.

In February, however, Tanaka asked Yamaguchi to return any document that showed what he had requested.

Yamaguchi felt that request was aimed at destroying evidence and leaving him totally responsible for the forgeries, so he went to police and divulged his role in the scheme, the prosecution said.

Yamaguchi was indicted although he was never detained.

According to the indictment, Yamaguchi is charged with co-conspiring with the Tanakas to hire three part-time workers in late October 2020 in Saga city on the main southern island of Kyushu to forge the signatures of 71 voters in Aichi Prefecture.

(This article was written by Haruka Ono, Junji Murakami and Kento Matsushima.)