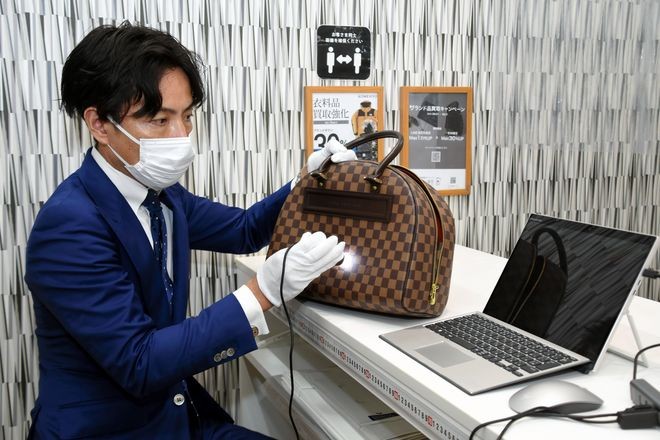 NAGOYA--A leading broker of second-hand brand-name goods is using an artificial intelligence-based mechanism to remove fakes from the market.

Komehyo Holdings Co., which buys and sells used articles, said the technology can identify imitations with a probability of “99 percent.”

“With the help of AI, we will eliminate fake products and prepare an environment where products are sold and purchased far more safely,” said Yuya Yamauchi, a Komehyo director responsible for the development of the authentification system.

“The first thing is to identify the product model of the item to be checked,” Hayashi said.

A smartphone is used to photograph overall images of the item in question. The pictures are uploaded to a computer, which shows more than one candidate model selected from the company’s database.

“New brand-name products are released every year,” Hayashi said. “Although much time would be needed for humans to learn and cover the enormous number of items sold in the past, AI can quickly narrow down the candidate models.”

Details of the inspected item are then photographed using a camera-equipped microscope, and the microscopic images are entered into the AI system for comparison with those of the genuine models selected as candidates.

Tiny details revealed in the microscope images can confirm if the inspected product is a genuine or fake one.

Based in Nagoya’s Naka Ward, Komehyo was started by Taiji Ishihara, a grandfather of the current Komehyo president, Takuji Ishihara, in 1947 in the Osu district.

It was originally a 16-square-meter old clothes shop.

The company began relying on AI in August 2020 to examine bags, wallets and other fashion accessories for authentification.

It initially focused on Louis Vuitton products, the most popular items at Komehyo. The system now covers goods from five major brands, including Gucci, Chanel and Hermes.

The AI mechanism is used at 40 Komehyo stores throughout Japan, including outlets that exclusively purchase second-hand articles.

The company posted 50.7 billion yen ($456 million) in consolidated sales for the business year ending in March 2021.

Komehyo started developing the AI system in 2018. It fed its AI-related database photos of brand-name products chosen from among 1.6 million articles amassed by Komehyo annually.

The completed system boasts an accuracy rate of “99 percent” and can “closely examine details invisible to the naked eye,” according to Hayashi, an appraiser for 20 years.

While appraisers use loupes with 10- to 20-time magnifications for close examinations, the images scanned by AI are shot with microscopes with magnifications of dozens to hundreds of times, enabling a higher-definition data analysis.

The company’s sales representatives with lower examination skills can at times become so absorbed in checking the items that they fail to communicate properly with the clients in front of them.

AI is also expected to be a useful tool in dealing with increasingly sophisticated imitations.

Illegal copies of designer items have improved in quality every year, and more people are selling and buying designer products over the internet.

“A growing number of people concerned about the authenticity of their new possessions are contacting us,” said a publicity official of Komehyo.