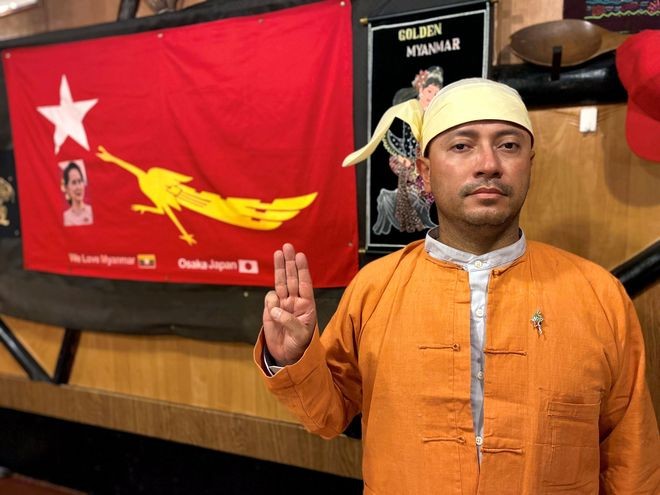 OSAKA--Aung Myat Win, a refugee from Myanmar who lives in Japan, repeatedly told a tearful young man via smartphone: “I will rescue you from danger for sure. Don’t worry.”

He made good on his promise.

The crying man was Pyae Lyan Aung, a soccer player on Myanmar’s national team who visited Japan for a World Cup qualifier in May. He used a three-finger salute to express his opposition to the military coup in his nation, and feared his life would be in danger if he returned to his homeland.

Aung Myat Win heard from an acquaintance that the player was seeking help.

After the exchanges via smartphone, Aung Myat Win rushed to Kansai International Airport to pick up Pyae Lyan Aung before his flight home. He gave Pyae Lyan Aung a place to stay and served as his interpreter until Japan granted him refugee status in August.

The man instrumental in his escape was also engaged in the pro-democracy movement in Myanmar that started in 1988.

Aung Myat Win was detained by the military on two occasions in his homeland. Concerned about his safety, he joined a ship’s crew and headed for Hiroshima Port to sneak into Japan.

He was arrested in 2002 on suspicion of illegally staying in Japan and detained for two years at an immigration control facility.

After 38 interviews with Justice Ministry officials, he was granted refugee status.

“At that time, I was exhausted both physically and mentally,” Aung Myat Win, now 47, recalled. “I could feel neither happiness nor sorrow.”

Aung Myat Win has four ethnic backgrounds so he doesn’t look Burmese, the largest ethnic group in Myanmar. He had been bullied during his childhood because of his “different” appearance.

He has since been voicing objections against the unfair treatment of minority Rohingya people in Myanmar.

When Aung San Suu Kyi visited Japan in 2013, Aung Myat Win told her that “what is most important for Myanmar is human rights education.”

Aung Myat Win said he was met with kindness from many people in Japan, including an ethnic Korean resident who gave him a job at a barbecue restaurant during difficult times, and a teacher who helped him raise money for his university education.

“I want to share my knowledge on human rights and law I have learned in Japan someday in my homeland,” he said.