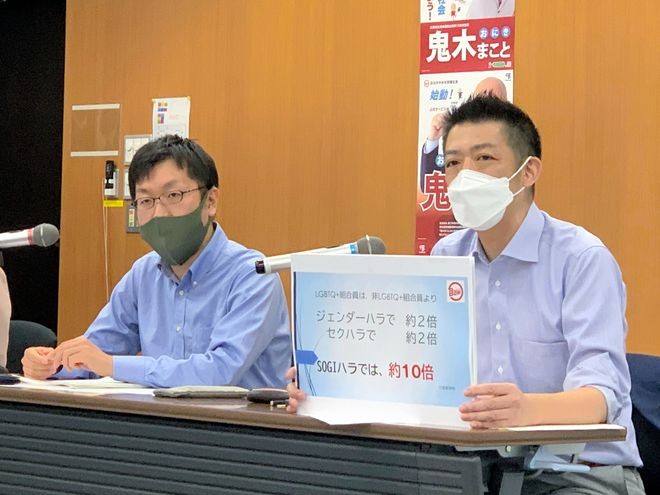 Yuichi Kamiya, left, director-general of the Japan Alliance for LGBT Legislation, who supervised the survey conducted by Jichiro to look into working conditions and workplace diversity, also attends the news conference held in Tokyo's Chiyoda Ward, saying that the comment section was filled with many opinions from the respondents. (Mari Fujisaki)

A survey conducted by a labor union consisting of local government and public service sector employees showed that 6.6 percent of its members identified themselves as being LGBTQ+ (lesbian, gay, bisexual, transgender, queer and others).

The findings also shed light on how many sexual minorities suffer from harassment in their workplaces.

The All-Japan Prefectural and Municipal Workers Union (Jichiro) conducted the survey between April and June to help improve not only working conditions but also subway operations and other public services.

About 65,000 members were chosen for the survey. Of these, about 19,000 provided valid responses.

Of particular note was that LGBTQ+ people have experienced sexual orientation and gender identity (SOGI) harassment on many occasions, being called names such as "okama" (faggot) and "rezu" (lesbo), and forced to wear a uniform designed for their gender at birth.

According to the survey, 7.9 percent of sexual minorities said they have experienced such harassment in their workplaces and during work-related drinking parties in the past five years. The figure is about 10 times that of others (0.8 percent).

When asked how they feel about having colleagues who have changed their gender, 90.9 percent said they "wouldn't mind at all" or "would not mind."

However, only 1.9 percent of LGBTQ+ people said they came out in their workplaces.

Meanwhile, 13.9 percent said their workplaces have dealt with LGBTQ+ people.

Jichiro is set to compile a set of recommendations as early as October to help local governments use the survey results to formulate their policies.

"We labor unions want to tackle these issues to create an opportunity to provide good services to residents in a bottom-up manner," said Teppei Hayashi, head of the department in charge of strengthening and expanding the organization.