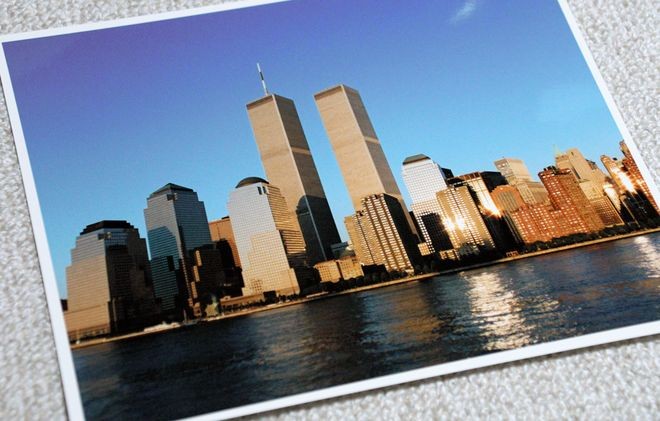 A photo of the World Trade Center, center, taken by Tazuko Takeya’s husband during their trip to the United States to meet Mrs. Campbell in 2000, a year before the 9/11 terrorist attacks (Tabito Fukutomi)

HIROSHIMA--Fueled by the memories of the 9/11 terror attacks in the United States and her own experiences as a Hiroshima atomic bomb survivor, writer Tazuko Takeya still works late into the night.

The 93-year-old author was writing her new novel on a laptop at her home in Hiroshima’s Higashi Ward with a newspaper article on the chaotic situation in Afghanistan following the Taliban takeover by her side in early September. She works on the book until 2 a.m. every day.

On Sept. 11, 2001, Takeya was at a loss for words as she saw the World Trade Center collapsing on TV. Footage of children crying in the dust stirred up by the debris reminded her of her own experience when she was 16.

When the atomic bomb was dropped on Hiroshima on Aug. 6, 1945, she was traveling on foot from a munitions factory about 1.5 kilometers from ground zero. Takeya was mobilized there as a student to help the war effort.

She fainted from the impact of the blast, which left her with burns on her face and sores all over her body. She was so traumatized by the experience that she even became suicidal.

Takeya visited the United States in 1955 to undergo a skin transplant for her burn scars as part of U.S. citizens’ efforts to provide support to atomic bomb survivors.

She had mixed feelings about relying on the help of Japan's former enemy, but her host family was kind and treated her like a member of the family. Mrs. Campbell, who is two years older than Takeya, told her that she is “my cute little sister” as she embraced Takeya.

Takeya kept in touch with her after returning to Japan. She learned that Mrs. Campbell’s grandparents were killed by the Nazis at the Auschwitz concentration camp.

“I came to believe that I should hate war, not the United States,” said Takeya.

Takeya got married and began writing romance and mystery novels when she was 53. But she never wrote about the atomic bombing.

“Only those who went through it can share such a harrowing experience,” she said.

But a letter she received from Mrs. Campbell shortly after the 9/11 attacks changed her resignation about the difficulty of telling a story about the atomic bombing.

“People who have nothing to do with war were killed,” the letter read.

The letter also noted that she saw smoke rising from the World Trade Center from her company’s office.

Mrs. Campbell called Takeya after the United States launched attacks against the Taliban regime in Afghanistan in response to the terror attacks.

“Please send out a message of peace from Hiroshima,” she told Takeya.

Takeya thought about how to get that message across to others.

“War leaves nothing but a feeling of emptiness,” she said. “I couldn’t help writing about the atomic bombing amid looming threats of war.”

She spent about three months writing a novel titled “Kioku no Danpen” (Fragments of memory) and had 1,000 copies of the book printed.

She published her second novel about the bombing after she was shocked at the prospect that Japan would also become involved in the war the United States waged against Iraq in 2003.

Over the past two decades, many civilians and U.S. soldiers have died in the U.S.-led “war against terror.”

To back up the fight, the Japanese government deployed the Self-Defense Forces to the Indian Ocean and Iraq and enacted security legislation to allow Japan to exercise its right to collective self-defense.

Takeya fears that world leaders are not truly listening to the voices of atomic bomb survivors.

“Innocent civilians always become victims of war,” she said. “What lessons did the world learn from the Aug. 6 atomic bombing and the 9/11 attacks?”