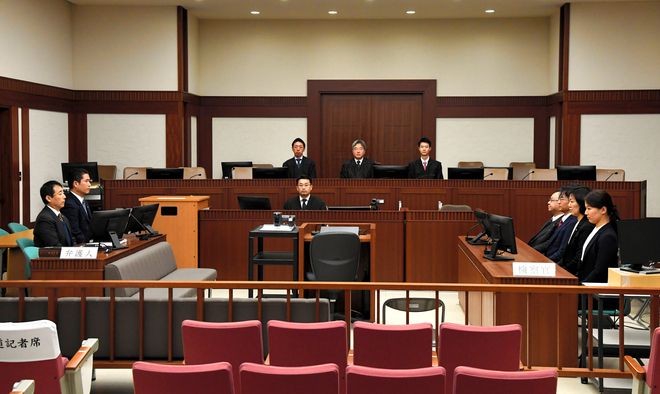 The No. 101 courtroom at the Yokohama District Court (Pool)

A lawyer has appealed a judge’s order that prohibits attorneys from using a court’s electrical sockets for their computers during criminal trial proceedings.

Takashi Takano, a member of the Daini Tokyo Bar Association, filed the appeal with the Tokyo High Court.

Takano said he took notes and checked evidence on his personal computer while it was being recharged via a socket near the defense lawyer’s seat at the Yokohama District Court in May this year.

He was in the court for pretrial procedures in a stimulant smuggling case.

In September, Presiding Judge Taro Kageyama told Takano to operate the computer with “your own power source” because “electricity owned by the state” should not be used for “your private” defending purposes.

Takano argued that refusal to let lawyers charge their mobile devices would restrain their activities because they need computers when they visit courts, prisons and elsewhere.

He criticized the judge’s decision as a “violation of Article 37 of the Constitution that ensures defendants can receive effective defense services.”

Kageyama, however, rejected Takano’s protest, so he submitted a complaint to the Tokyo High Court, demanding permission for lawyers to use electricity at courts.

“The public aspects of lawyers’ activities are underestimated, so I cannot leave the argument unchallenged,” Takano said.

In pretrial procedures, judges, prosecutors and defense lawyers confirm key points of contention and evidence to ensure smooth proceedings during the trial.

The pretrial procedures are held at meeting rooms in court buildings or in the actual court behind closed doors. One pretrial session usually takes 30 minutes to one hour.

Takano lambasted the judge’s description of lawyer’s work in the procedures as a “private” activity.

Although it was the first time Takano has been told to stop using courtroom sockets, he said he had heard that other attorneys faced similar restrictions around Japan.

“Computers are essential for quality defense these days,” Takano said. “It (the court order) violates a right specified in the Constitution and thus should be questioned in front of the public.”

“Guaranteeing a proper environment for a defense is not an act of ‘charity’ by the courts,” Mizuno told The Asahi Shimbun. “It is indispensable for the entire judicial community.”