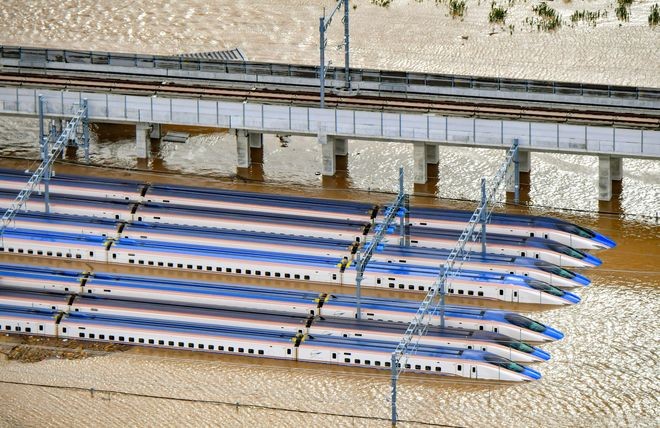 Trains for the Hokuriku Shinkansen Line are swamped in Nagano in October 2019 after being inundated by the Chikumagawa river caused by Typhoon No. 19. (Mari Endo)

If the Arakawa river in eastern Tokyo tops its banks in a flood, no less than 11 major lines of East Japan Railway Co. (JR East) would wind up under water in a disaster, according to an estimate by the company.

Stations and other facilities along Tokyo's Yamanote Line, the Tohoku Line, including the Saikyo and Keihin-Tohoku lines, and elsewhere would be submerged, the company said, throwing transportation capabilities into chaos.

As the Tohoku, Joetsu and Hokuriku Shinkansen high-speed lines would be damaged as well, train operations outside Tokyo's metropolitan area could likewise be disrupted, JR East said.

Between December and July, JR East carried out a study simulating how a “once in 100 years” flood of the Arakawa river following torrential rain would affect surrounding areas. Such a flood is expected to occur if temperatures rise two to four degrees caused by global warming.

As well as creating a transportation catastrophe for commuters, JR East would stand to lose a maximum of 4 billion yen ($35.8 million) more than the case in which the temperatures do not rise, the estimate found.

As much as 70 percent of JR East’s passenger revenue comes from the 11 lines that would be damaged, so to prevent such a huge loss, the rail operator is forging ahead with countermeasures against a potential disaster.

The prediction was made as part of efforts to determine possible financial risks to public corporations arising from climate change, however, “no other infrastructure companies have apparently released such detailed numerical data as us,” a JR East representative said.

In its analysis, JR East referred to government-issued inundation forecast maps and the railway company's own exclusive data on the frequency of flooding.

That enabled JR East to compare the altitudes of its 400 rail-related facilities, including stations and electrical substations in the Tokyo metropolitan area, with flood depths.

JR East's analysis also speculated on the outcome the expected temperature rise would have on the total financial damage the company would incur from the flooding, taking into account the core railway lines’ asset values and future changes in passenger revenue.

The analysis showed the temperature rise would bring about an increase of 3.4 billion yen to 4 billion yen in the total loss deriving from the suspended operations and the decline in revenue from passengers before the railways’ reconstruction after the disaster.

Boosting steps against the flooding prior to the occurrence of the catastrophe is projected to cut the increase of the financial damages to 1.3 billion yen to 1.6 billion yen, JR East found.

The company did not disclose how much it would lose financially in the event of flooding of the Arakawa river if there were no changes in the global temperature.

JR East's study was conducted based on a proposal made by the international organization Task Force on Climate-Related Financial Disclosures (TCFD).

TCFD was set up by the Financial Stability Board (FSB), a global organization promoting international financial stability, which consists primarily of financial authorities of member countries around the world.

The organization advocates that corporations should make their climate change-linked financial data available so individuals and groups can choose appropriate ways to make investments after taking into account the business risks they would face stemming from global warming.

Some 400 companies and organizations in Japan have expressed their agreement with the proposal, and JR East is planning to make full use of its findings for efforts to better respond to global warming and other environmental issues.

When massive Typhoon No. 19 hit Japan in 2019, 10 trains were flooded at JR East’s Shinkansen rail yard in Nagano, leaving the carriages in such terrible condition that many of them had to be scrapped.

Based on the lessons learned from the typhoon, JR East has incorporated a rain forecast system at 78 locations, including rail yards, to help officials decide whether to evacuate trains to safety in the event of heavy rainfall.

The company has also moved a number of establishments that are vital to its transportation functions to higher elevations and installed watertight barriers at the facilities.