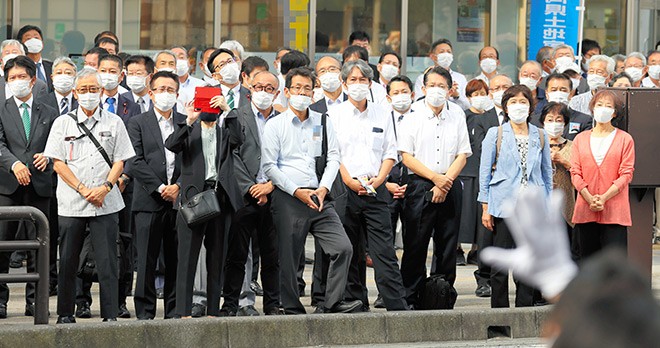 Kishida’s bigger test will be the Lower House election expected at the end of this month. The results of the Oct. 24 by-elections in Shizuoka and Yamaguchi prefectures could be precursors to the national poll.

The by-elections were made necessary by the resignations of ruling Liberal Democratic Party lawmakers to run in other races.

Kishida, who took office earlier this week, has indicated that he intends to dissolve the Lower House on Oct. 14 and hold a snap election on Oct. 31.

He was in Shizuoka on Oct. 7 to speak on behalf of the LDP candidate, Yohei Wakabayashi, 49, a former Gotenba mayor.

The limited time before the expected Lower House election could hurt the opposition parties’ plan to cooperate and rally around one candidate for the single-seat districts.

Such cooperation did not emerge in the two by-elections.

The main opposition Constitutional Democratic Party of Japan was unable to field candidates in both prefectures. So it will support Shinnosuke Yamazaki, the candidate in the Shizuoka election backed by the Democratic Party for the People.

The Japanese Communist Party has also fielded a candidate, Chika Suzuki, in the Shizuoka by-election.

The Yamaguchi by-election was made necessary because Yoshimasa Hayashi resigned to run in the Lower House election.

The candidates in Yamaguchi are the LDP-endorsed Tsuneo Kitamura, the JCP-endorsed Kiyo Kawai, and Shota Harada, who is backed by the party that was set up to “protect the public” from Japan Broadcasting Corp. (NHK).

Yamaguchi Prefecture has long been an LDP stronghold. The four Lower House seats there are monopolized by the LDP, including those held by former Prime Minister Shinzo Abe and Defense Minister Nobuo Kishi.