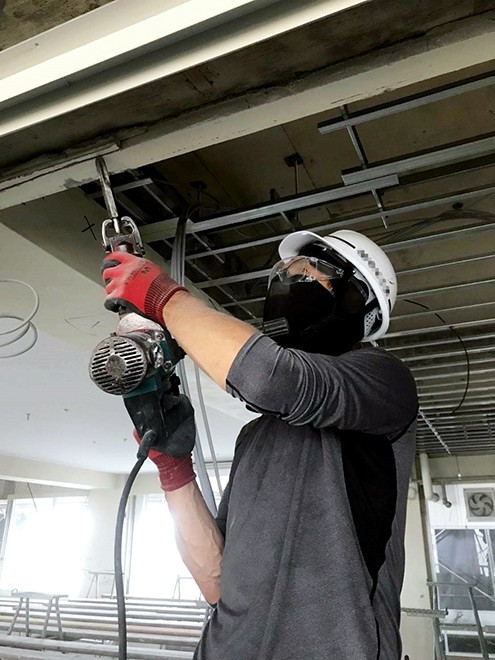 A former gang member works at a construction site in Hyogo Prefecture. (Provided by the man)

Tougher laws and prefectural rules have made life increasingly difficult for yakuza gangs in Japan, leading to a gradual exodus of members over the past decade, sources said.

One of the few lucky former members to have found a job afterward in the construction industry is a 54-year-old residing in Hyogo Prefecture.

In those days, the man would often have sushi or grilled beef dinners at restaurants. Working in the construction industry today, the man makes about 200,000 yen a month, so his dinners consist mainly of bento meals from convenience stores.

But he says he does not mind the switch to the less luxurious fare.

“Meals after a hard day of work are really delicious,” he said. “I should have realized much earlier how great a normal life is.”

As a gang member, the man eventually became involved in smuggling stimulant drugs, and he spent time in prison on seven different occasions. Life became harder as he had more run-ins with the law.

When he last left prison in February, he had only about 100,000 yen to his name. He noticed a flier in prison for a construction company seeking workers, so he applied and was hired.

The company is run by a former high-ranking member of a gang affiliated with the Yamaguchi-gumi, Japan’s largest organized crime syndicate. After he left his life of crime behind, the company president began hiring ex-convicts beginning around 2008. So far, he has employed about 500 of them.

The company president said he noticed that in recent years, more mid-level and higher-ranking gang members have been leaving criminal life.

A major reason is the more difficult economic circumstances gangs find themselves in because of how the legal landscape has changed.

This October marks 10 years since Tokyo and Okinawa became the last prefectures to adopt ordinances to drive gangs out of their jurisdictions.

Unlike the organized crime law that prohibits gang members from making inappropriate requests of the general public, the prefectural ordinances ban people from providing them benefits by, for example, lending office space to gang members or granting them free parking.

Companies and individuals who violate the ordinances are given orders by prefectural public safety commissions to stop. If the orders are not obeyed, the company is named and shamed, and fines and prison sentences are also possible.

Between 2011 and 2020, there have been 865 cases of recommendations or orders issued by the commissions, according to the National Police Agency.

Between 2011 and 2020, about 5,900 gang members have left their gangs behind after receiving help from police and local organizations striving to drive out organized crime.

However, it can be tough to find help once they leave gang life. Only about 210, or 3.5 percent of the total, have found jobs through the association set up to help such individuals return to a normal life.