Experts: Oct. 7 quake not near level of predicted ‘Big One’ 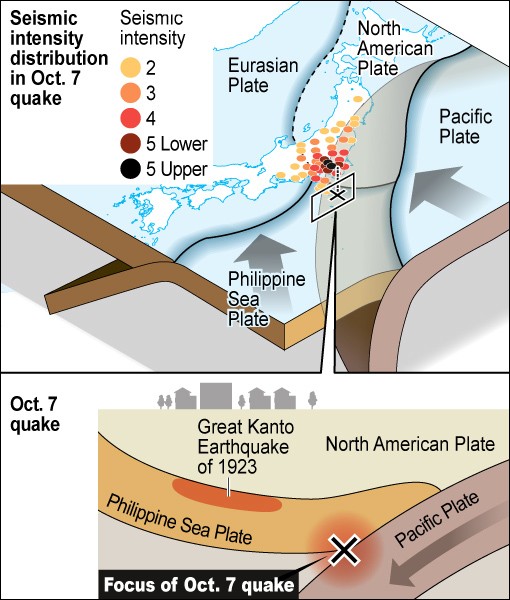 The Oct. 7 earthquake was the strongest felt in Tokyo in a decade, but it will pale in comparison to the one that has long been predicted to devastate the capital.

Seismologists and other experts are now trying to determine if the latest quake is tectonically connected to the future “Big One.”

“The earthquake anticipated by the government’s Cabinet Office would have a rather shallow focus, but the latest one’s focus was deeper and smaller in magnitude,” the Meteorological Agency said at a news conference early on Oct. 8.

The Oct. 7 quake had a magnitude of 5.9. The future one is expected to be of magnitude 7 or larger.

Each whole number on the magnitude scale represents a tenfold increase in the measured amplitude and a 32-fold rise in energy release.

Koshun Yamaoka, a professor of seismology with Nagoya University’s Earthquake and Volcano Research Center Graduate School of Environmental Studies, said the latest temblor is not the one that has been anticipated.

“The location of the Oct. 7 quake’s focus is in the area where a powerful earthquake is predicted to directly strike the capital, but it was smaller in magnitude compared with the magnitude 7 or larger for the temblor predicted.”

Some of Tokyo’s 23 wards reported upper 5 on the Japanese seismic scale of 7 on Oct 7.

Yamaoka said disparities in the reported intensities within Tokyo are related to the ground conditions of each area.

“The intensity of shaking on the surface is related to attributes of the ground,” he said. “The intensity varies, depending on where it is happening in Tokyo.”

Takuya Nishimura, an associate professor of geodesy with Kyoto University’s Disaster Prevention Research Institute, said the Oct. 7 temblor is believed to have occurred near the boundary between the Philippine Sea Plate and Pacific Plate.

He said beneath the Kanto region lies various plates that makes the region tectonically complex.

The Cabinet Office’s prediction also showed that a powerful earthquake could strike near the boundary between the Philippine Sea Plate and the Pacific Plate.

The 1923 Great Kanto Earthquake that killed more than 100,000 people occurred in the Philippine Sea Plate.

Nishimura said an earthquake with a magnitude 6 or larger can hit anywhere in Japan at any time.

“People should be prepared for a strong earthquake because it will cause more damage in a densely populated area,” he said.
Yamaoka also noted that strong quakes, such as the one on Oct. 7, have repeatedly struck in northwestern part of Chiba Prefecture.

One with a similar magnitude hit that area in July 2005.

“In the case of the 2005 quake, a tremor with a magnitude of 4.5 struck a week later,” he said. “We need to remain alert because aftershocks may occur over about a week.”

(This article was written by Takuro Yamano and Takahiro Takenouchi.)