Former student of tsunami-hit school returns to serve as guide 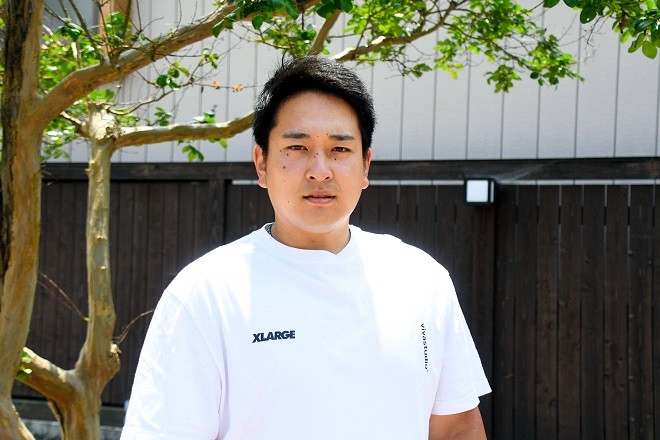 Miki Onoda, a former student of Kesen Junior High School in Rikuzentakata, Iwate Prefecture, who will serve as a guide, poses on June 12 in the prefecture’s Sumita. (Photo by Ryohei Miyawaki)

RIKUZENTAKATA, Iwate Prefecture--When Miki Onoda last left the building that used to be Kesen Junior High School here, he and his classmates were fleeing to higher ground to escape the 2011 tsunami.

Now, Onoda, 23, has returned after coming forward upon hearing his hometown was seeking local guides to remind others of the tragedy.

Entering the school’s building for the first time in 10 years last winter, he was met with concrete pieces scattered through a classroom and a steel frame hanging from the ceiling.

The clock still showed 2:46 p.m., the time the magnitude-9.0 Great East Japan Earthquake struck on March 11, 2011. Words written on the blackboard were left as they had been at the time of the tremor.

Onoda was in his first year at the school when his hometown was engulfed by the towering tsunami. The three-story building sat dozens of meters from the coast and even its rooftop was drenched by the wave.

Though its 86 students were attending a rehearsal of the scheduled graduation ceremony at the gymnasium, they were able to evacuate to higher ground. The school building was destroyed by the tsunami, with no traces of the gymnasium found at the site later.

Rikuzentakata city in 2012, the following year of the disaster, decided to preserve the damaged school as a memorial in the hopes of passing down the horrors of the tsunami for posterity.

The building underwent refurbishment to enhance its seismic resistance, while fences and information boards were set up in corridors and classrooms.

In the run-up to the structure’s public display scheduled for May this year, Rikuzentakata last autumn started soliciting guides who would usher sightseers around the Takatamatsubara Memorial Park, which is home to the previous school building, among residents.

Originating from Rikuzentakata, Onoda finished his course at a college in neighboring Aomori Prefecture and then returned to Sumita, Iwate Prefecture, adjacent to Rikuzentakata, to “work for my home prefecture.”

Just like regions on the decline that Onoda learned of in a class on local revitalization at his university, Rikuzentakata has much vacant land arising from a shrinking population of younger residents.

“I need to make more people learn (about Rikuzentakata) because it is currently drawing greater attention following the catastrophe,” Onoda said.

Onoda decided to apply for the guide program to thoroughly explain how painful it was that daily life was suddenly disrupted by a natural disaster.

Those who want to serve as guides must take a training program to learn about the disaster-inflicted damage and the local area’s history, and then pass an exam.

While 30 or so individuals mainly from the local region were selected as guides at the end of March this year, Onoda was the only former student of Kesen Junior High School, which he graduated from.

The municipality stopped accepting applicants amid the novel coronavirus pandemic but resumed the program on Sept. 18.

Thinking back to the disastrous tsunami, Onoda believes “younger people who will play a key role in Rikuzentakata from here on out have to tell their stories,” and is gearing up to make his debut shortly.

“I want to guide people as soon as possible,” Onoda said, looking forward to touring his alma mater with visitors.

Nearly 50 citizens’ groups in the three especially heavily damaged prefectures of Iwate, Miyagi and Fukushima are struggling to sign up individuals to speak of their experiences for visitors more than a decade after the temblor and tsunami.

According to the 3.11 Future Support Association, the number of groups offering victims’ accounts and guiding services at monuments to the earthquake in Miyagi, Iwate and Fukushima prefectures were 26, 16 and six, respectively, in August this year.

The association works to hand down stories about the disaster and engages in rebuilding assistance in Ishinomaki, Miyagi Prefecture.

Some of the groups such as Okawa Densyo no Kai (Group to pass down facts about Okawa) in Ishinomaki and Miyako Kanko Bunka Koryu Kyokai (Miyako tourism and culture exchange association) in Miyako, Iwate Prefecture, accept a range of members.

As much smaller groups and individuals are also involved in activities to share victims’ accounts on many occasions as well, the numbers are expected to become far larger if such entities are included.

Those telling their stories are said to be primarily elderly citizens and students. Few people with full-time jobs will serve as storytellers, so the prefectural governments are concerned about a future shortage of individuals speaking about their experiences.

Miyagi Prefecture is stepping up its effort to nurture storytellers through training programs held at commemorative facilities and establishments themed on the disaster. It also considering broadcasting the accounts of busy guides who cannot accompany tourists because of work and other reasons through the internet.

“We would like the young, working generation to take part in the activities to tell the victims’ stories,” said a representative of Miyagi Prefecture’s section for recovery support and experience sharing.

An official of Iwate Prefecture’s reconstruction assistance division noted that guides who will start working from now will include even younger people who do not have memories and experiences of the disaster.

As part of its education program on the earthquake and tsunami at schools, the prefecture distributes a supplementary textbook to elementary school pupils as well as junior and senior high school students.

“Groups need to directly explain the significance of their activities to students, so that they will be able to feel a sense of reality about the disaster,” the prefectural official said.