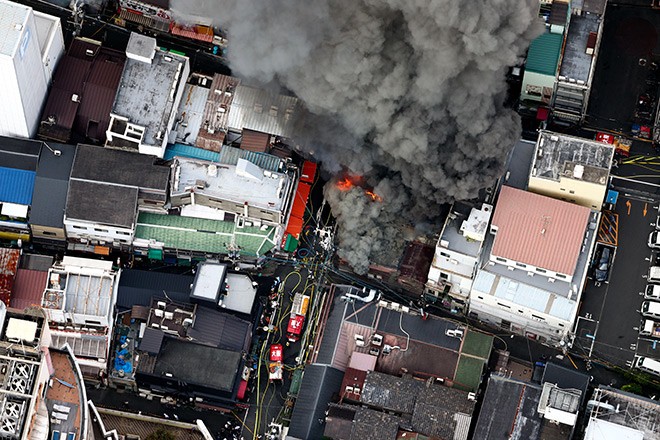 OSAKA—Firefighters were working to contain a fire raging in an area of tightly packed buildings in Chuo Ward on Oct. 8, according to Osaka city’s fire department.

“Smoke is coming out (of a building),” a witness said when reporting the fire to police around 11:40 a.m.

The buildings are in an entertainment area about 350 meters east of Osaka Metro’s Namba Station, home to many restaurants and buildings.

According to the Minami Police Station and the Osaka city fire department, a three-story wooden building with a barbeque restaurant on the first floor is believed to be the source of the fire, which spread to four neighboring buildings.

The barbeque restaurant was just opening when the fire broke out.

Five people--staff members and customers--were in the restaurant at the time, but no one was injured.

According to police, a witness saw flames on the third floor, where there was a vacant room.