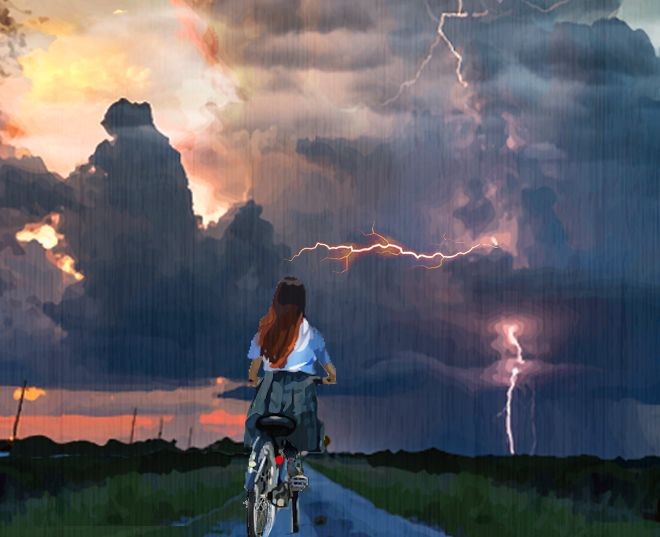 blackout
during next thunderbolt
the candle begins to flicker
--Claudia Brefeld (Bochum, Germany)

lightning...
how love came into my life
and left
--Arvinder Kaur (Chandigarh, India)

lightning...
the roar of the birds
across the sky
--Giuliana Ravaglia (Bologna, Italy)

The haikuist heard a honking car horn. Not having ventured far from home because of travel restrictions, Yutaka Kitajima said he finally went for a “drive with a fellow traveler.” After an extended vacation, Lakshmi Iyer returned to cleaning chores in Kerala, India.

Shimmering
above the dashboard--
a cobweb

at a thatched hut
sipping a welcome drink
lemon juice

holiday beach
a glint of orange sun
in my glass

jellyfish along the beach
her rainbow umbrella

While holidaying on the Ligurian sea near Savona, Italy, Daniela Misso was surprised by a spectacular view. Writing from Madison, Wisconsin, Rose Menyon Heflin is wary of the Devil’s triangle in the Atlantic Ocean. Zeljko Vojkovic witnessed a remarkable sight on Vis island in the Adriatic Sea. Sheila Riley vacationed in Hawaii, noting the islands are “struggling with the pandemic but still paradise-like.” T.D. Ginting referred to the movement and sound of magma prior to its eruption on the island of La Palma, Spain.

fluorescence
on the crests of waves
lightning flash

While editing a haiku essay, Satoru Kanematsu heard the unmistakable high-pitched call of a bull-headed bird demarking its autumn feeding grounds where it hunts for amphibians and mammals to impale onto tree thorns. Writing from Tokyo, Sanae Kagaya refers to a demilitarized border across Cyprus.

mandarin oranges
emit the color of peace
in the buffer zone

Francoise Maurice floated on the moors of Draguignan, France. Minko Tanev may have seen heat lightning in Sofia, Bulgaria. Prabhu shared a seat with the moon.

cycling beneath the moon…
my dress sweats
monsoon rain

On the backwater
an ever empty canoe
waning crescent moon

dark waters
rowing my boat
back to light

lightning by lightning
the neighbor in the window
appears and disappears

dead of night
out there, the glowing
tip of a cigarette

setting the mood
to my murder mystery--
late night thunderstorm

Poirot keeps me
in suspense--
thunder too

The word spelled “tear” in this one-line haiku by Angela Giordano can imply different meanings: the lightning a tear to the deep night. Was the sky being ripped apart, or is a lonely woman weeping? When queried about the heteronym, the author suggested it implied a wound. Here’s another line of her personified poetry: the moon enters every night from the old roof without noise.

Stania imagined a dreadful sight: all around the moor huts disembodied from the moon’s white face.

Enlightening poetry http://www.asahi.com/ajw/special/haiku/. The next issue of the Asahi Haikuist Network appears Oct. 29. Readers are invited to send haiku about sleeping waterfowl on a postcard to David McMurray at the International University of Kagoshima, Sakanoue 8-34-1, Kagoshima, 891-0197, Japan, or by e-mail to mcmurray@fka.att.ne.jp.